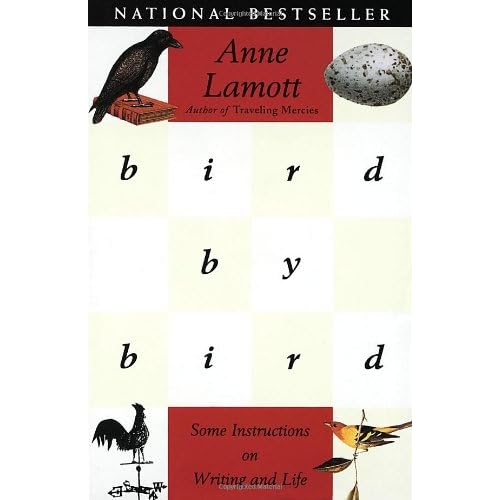 I started slipping into Immobilized Mode today. Does this ever happen to you? All the things I want and have to do start spinning around in my head faster and faster until I totally freeze up and can’t do anything except stand at the kitchen counter eating Häagen-Dazs while flipping through People magazine. A sure path to success.

Fortunately, I have a little phrase that can pull me out of this.

When Tim and I were first married, he worked for a company called NATCO that supported computer systems for Northwest Airlines’ flight simulators. The best part of his job was the free flight benefits. One of our favorite places to go was Portland, Oregon. Beautiful town and home to a huge bookstore called Powells. We were spending a leisurely afternoon there browsing our way through the shelves when Tim said, “Hey. Check this out.” He was holding Bird by Bird: Some Instructions on Writing and Life by Anne Lamott. He read the blurb on the back, which I’ll summarize for you:

When Anne’s brother was 10 years old he had to write a report about birds. He’d had three months to finish it but hadn’t done anything and it was due the next day. He was sitting at the kitchen table practically in tears with piles of bird books and papers surrounding him “immobilized by the hugeness of the task ahead.” Maybe you know the feeling. Then their father sat down, put his arm around the boy, and said, “Bird by bird, buddy. Just take it bird by bird.”

Isn’t that the best? I can’t tell you how many times I’ve repeated “bird by bird” to myself over the years. Or all the times Tim has said it to me. Pretty much daily, in fact. I rarely say it to him because he’s far less foolish than I am about trying to do too much. I love Anne Lamott for giving us a mental talisman to ward off the spinning.

The book is full of great stuff for writers, but it also has plenty of wisdom and humor that everyone can appreciate.

Have a great weekend!

Will's home! Just in time to join our Christmas tr