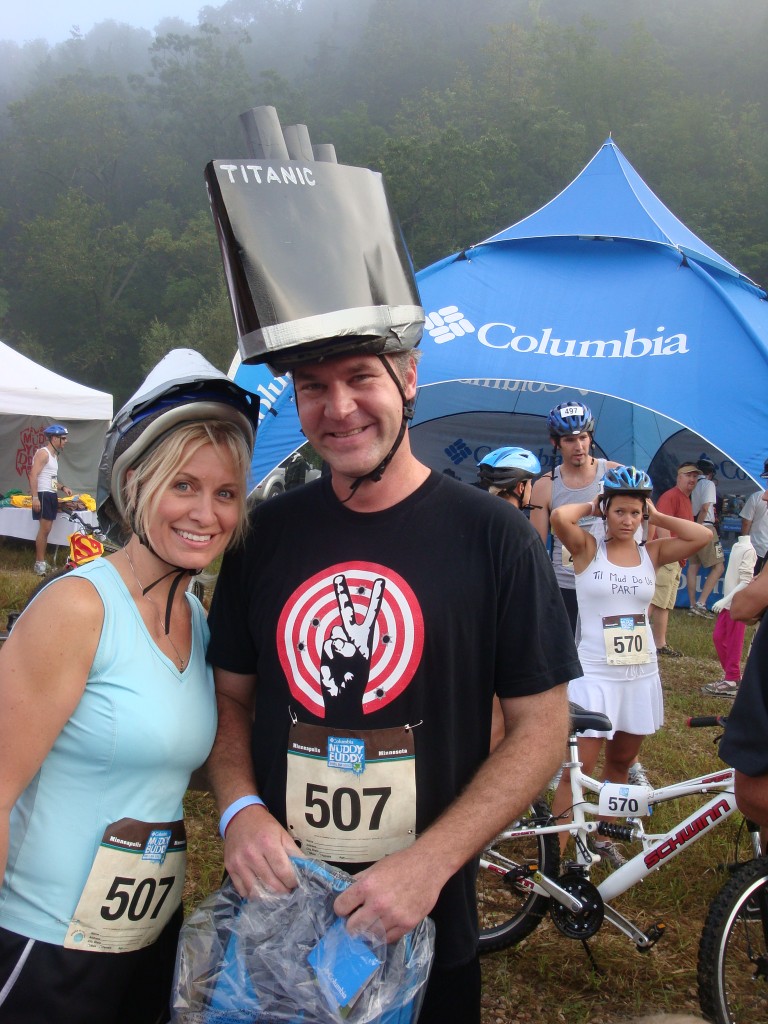 {Tim and me at the Columbia Muddy Buddy race at Afton Alps last August. Tim’s helmet designs of the Titanic and the Iceberg won Team Sinking Feeling first prize in the costume contest. We got two awesome Columbia backpacks as prizes. And then Tim got to wear that crazy thing for six miles of biking and running up and down hills, obstacle courses, and a long crawl through mud.}

Today is Tim’s birthday. Every birthday is special, but this one is especially so because last September, during six of the longest hours of our lives, we weren’t sure if he was going to make it through the night.

Tim had been in a mountain biking accident out on a trail in our neighborhood and the doctors were trying to get a handle on the bleeding that had shown up in a CAT-scan of his brain. No one could explain why he couldn’t move his arms and legs because he hadn’t broken any bones. They were also trying to understand why he was in such excruciating pain. I remember one doctor saying that the pain Tim was feeling in his shoulders might be a distraction from head trauma. So Tim lay there for hours, both of us wondering if the pressure caused by bleeding in his brain would become too much and that would be that.

Later that night, after scans and tests and putting the pieces together, the trauma team figured out that Tim had suffered a spinal cord injury called central cord syndrome. Basically, he was born with a narrow spinal column and a very specifically-placed blow to his chin caused his spinal cord to be pinched. The bleeding in his brain turned out to be minor and resolved itself quickly. So while his spinal cord injury was horrible, at least we knew that Tim would still be Tim.

I should write about Tim’s recovery one of these days because it’s quite a story. The good news is that he has regained full range of motion and continues to heal, but as anyone who has suffered chronic pain will tell you, it takes a toll. Still, he is powering through and hopes to feel completely like himself again someday.

They say that events like this are life-changing and I believe it. It’s much harder to get worked up about the little things, I’m more protective of our time together as a family, and we have a whole new appreciation for our community of family and friends. They stepped in to take care of our children during Tim’s original 17-day hospital stay and his surgery a month later, they cooked us so many meals I didn’t have to cook for two months, and they provided love and support through messages, prayers, and snow-plowing throughout the snowiest winter I can remember. As Tim told someone one day, “Other than the accident itself, this has been a great experience.”

So here’s a wish for the very happiest of birthdays to my jaan-e-jaan. I’m glad you’re still you.