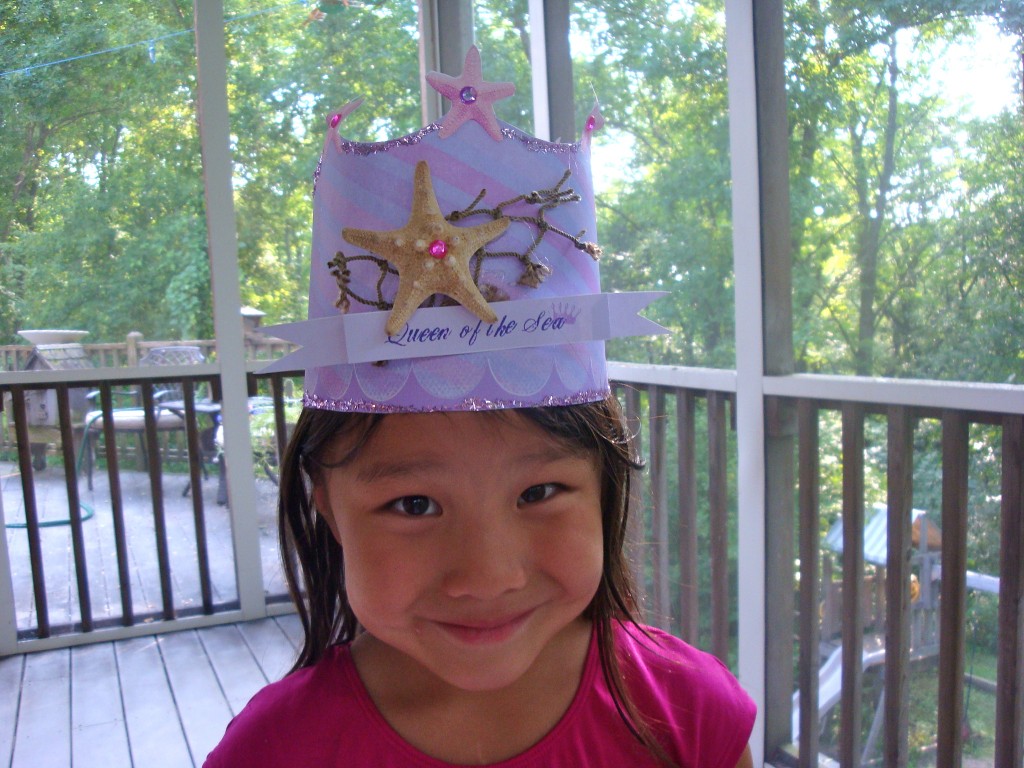 On Saturday, Lily turned seven and we celebrated with a Mermaid Party. I started with a plan downloaded from One Charming Party* and then once we got going, we came up with more ideas to make the party our own. 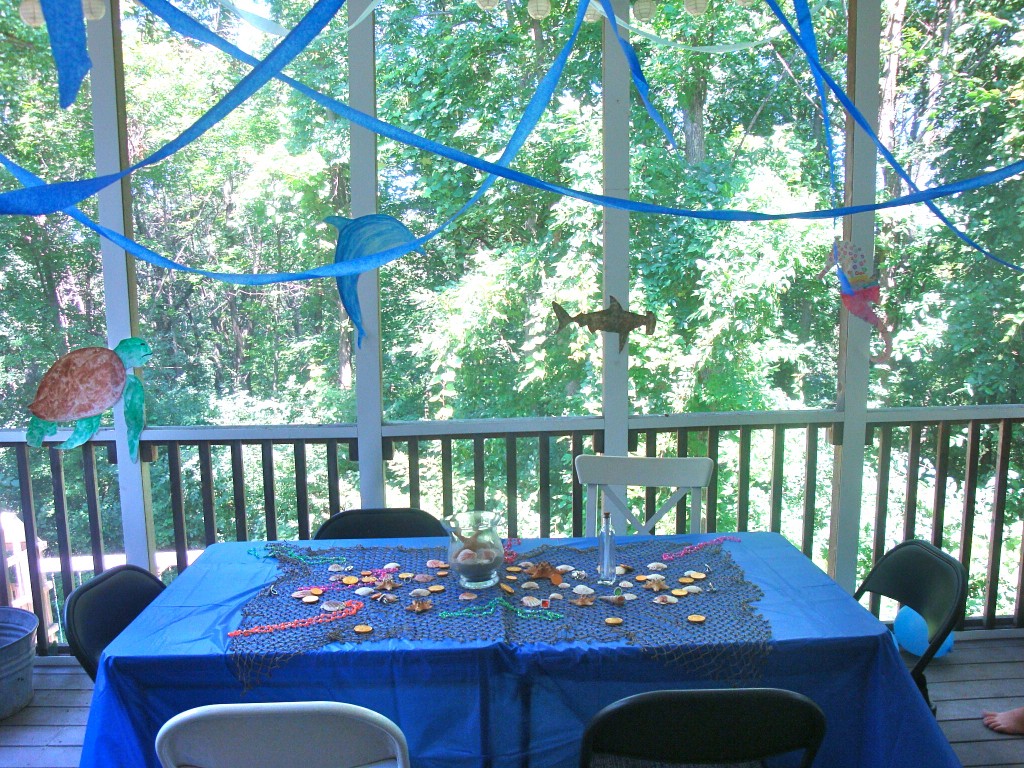 We don’t live by the ocean, so we had to create our own undersea world. Tim used a projector from work to draw sea creatures and then he and the girls used watercolors to paint them. My favorite is the sea turtle. Tim strung blue streamers from the porch ceiling to create a wave effect. A nice breeze kept the streamers blowing so it really felt like we were under gently rolling waves.

On the day of Lily’s party, I decorated the table with blue plastic tablecloths covered with a fishing net left over from Andrew’s pirate party years ago. (You can find decorative fishing nets at Michaels.) Then I sprinkled seashells, chocolate coins, and costume jewelry all over to look like treasure. Because mermaids always know where the best treasure can be found. 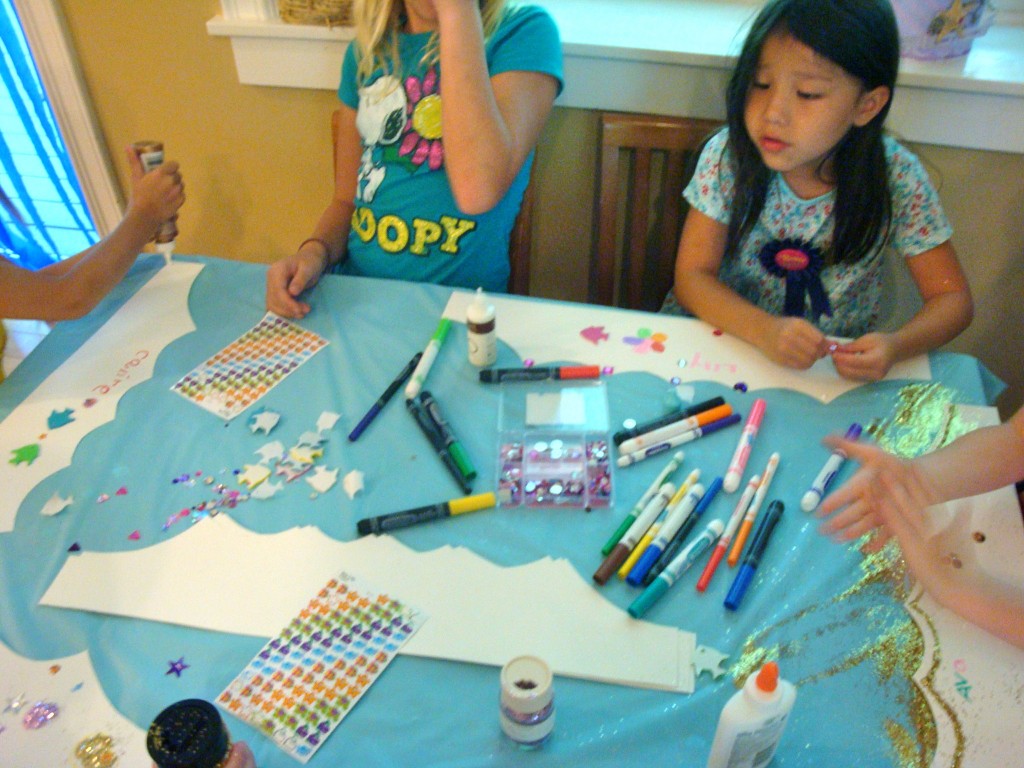 The first thing the party guests did as they arrived was to make a Mermaid Crown. I cut the crowns out of card stock and supplied the girls with glitter, stickers, markers, and plastic rhinestones. When the girls were done, we put the crowns aside to dry and moved on to the games. 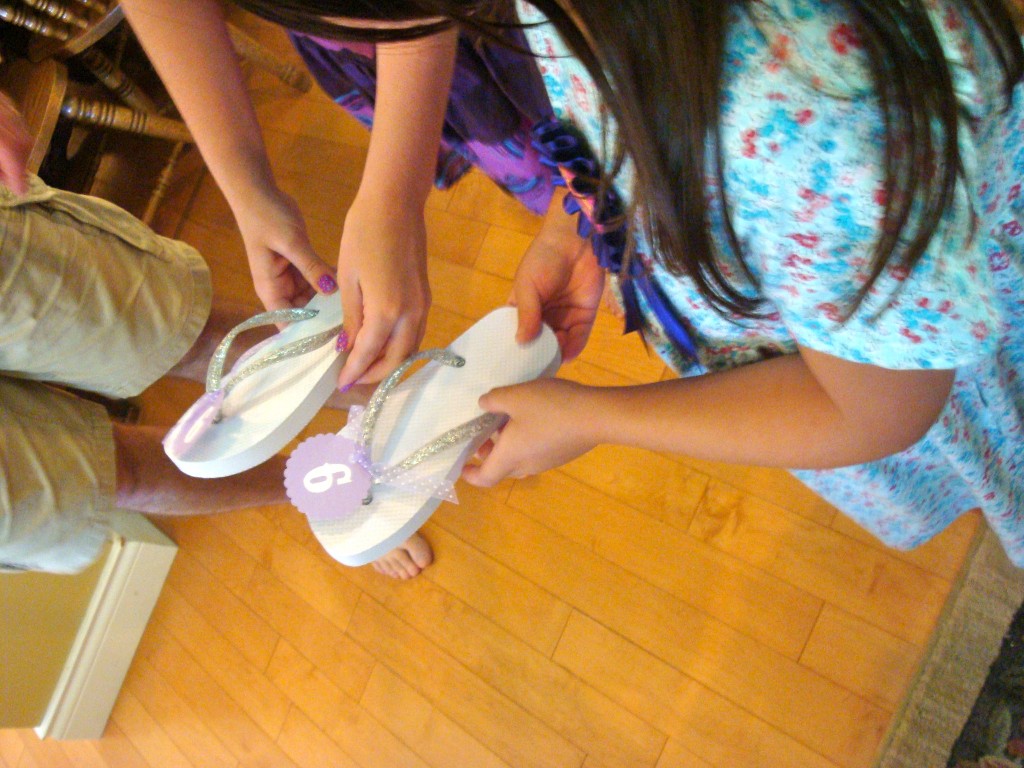 The Flip Flop game came from One Charming Party. I printed out a little scroll with the Mermaid Message they provided and placed it in a glass bottle. I read the message to the girls and then told them to look in their sand buckets to see what was inside. They each pulled out a flip flop with a number on it. I had hidden the other flip flop from each pair in the living room, so the girls had to scramble around and work together to find their missing flip flops. I bought the flip flops at Walmart; the ones featured in the party plan were from Old Navy. It’s a bit late in the season for purchasing flip flops, so I was lucky to find a bunch of them in the right size. 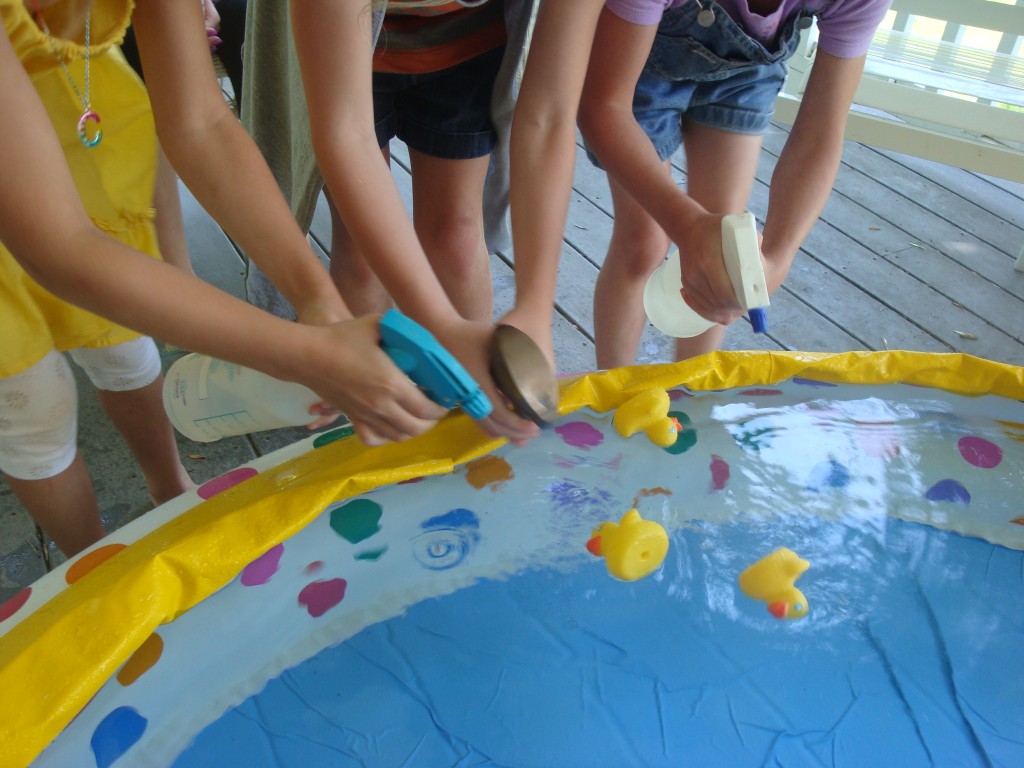 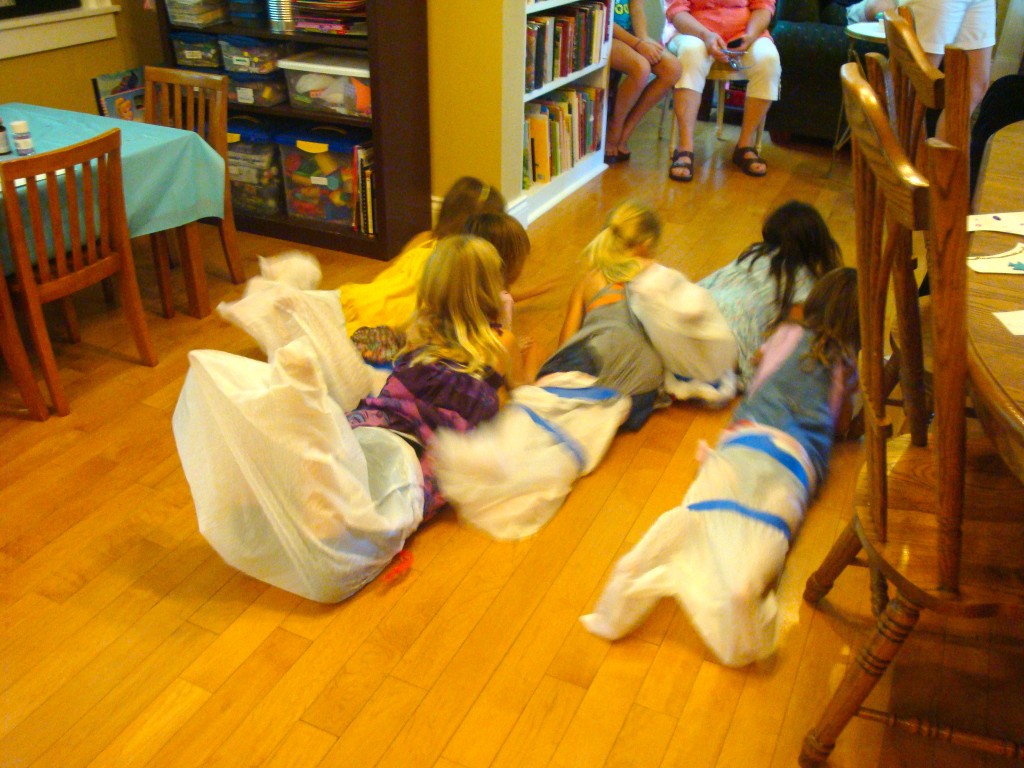 The Mermaid Race had us in stitches. Each girl stepped into a tall kitchen garbage bag and we duct-taped it around her waist and knees. The mermaids had to race across the floor on their bellies to Mermaid Rock, where they would find a surprise. We were all laughing as the girls wiggled and squirmed across the floor. The “prizes” that awaited them at Mermaid Rock (a chair with a white sheet thrown over it) were Mermaid Wands. You can see a photo of Lily holding one at the end of the post. 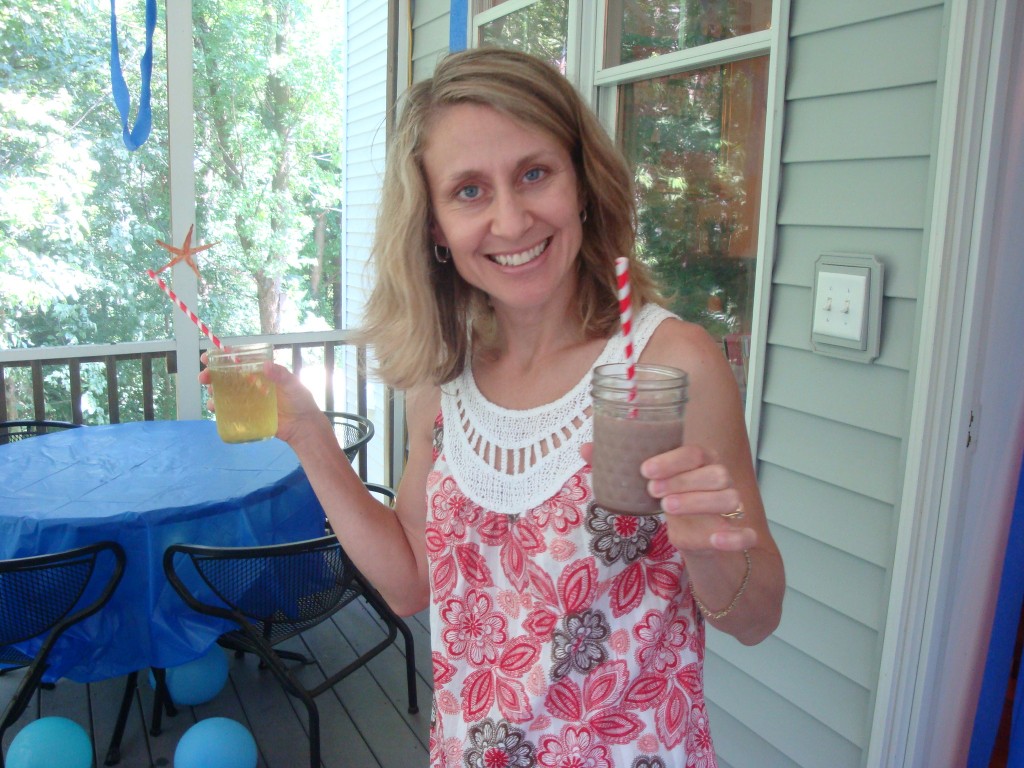 On to lunch. Most of the food ideas were straight out of the party plan—crab legs (carrots), deep sea oyster pearls (grapes), fish crackers (goldfish crackers), sea cucumber slices (cucumber slices), and peanut butter and jellyfish sandwiches. We added squid rolls (ham) and a great idea that Andrew came up with: water marlin (watermelon)! I loved how the girls’ eyes got huge when we told them what was for lunch. They looked at us like we were crazy when we offered them seaweed juice (Mello Yellow) or squid ink (chocolate milk) to drink. Squid Ink was Patti’s clever idea. I love how the creativity flows once you get going.

Grammy, Will, and Lily made the cupcakes: chocolate with a nice big mound of vanilla frosting on top. The toppers are from the party plan—I printed them onto card stock and used a 2-inch hole punch with a scalloped edge to cut them out. Lexie used glue and Martha Stewart tinsel glitter to embellish the tails. We are now smitten with tinsel glitter. How did Patti put it? It’s like it’s alive, I think she said. The last step was to attach the toppers to lollipop sticks with the glue gun and stick them in the cupcakes. 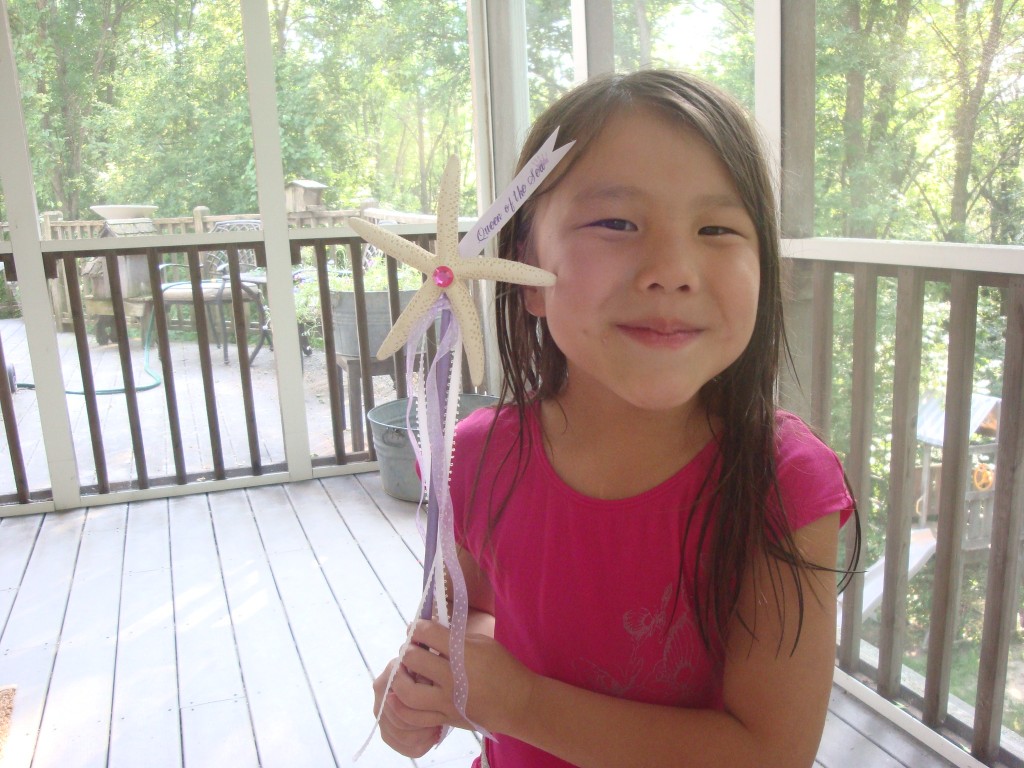 Lily opened her presents after the cupcakes and ice cream, and then the girls changed into their swimsuits and spent the last hour or so swimming and squealing outside.

I think the Mermaid Wand was my favorite idea from One Charming Party. I bought thin wooden dowels at Walmart, Tim cut them into 12″ lengths, and we brushed on some purple metallic acrylic paint. I printed “Queen of the Sea” labels onto card stock, glued plastic rhinestones onto sea stars (which I stole from the master bathroom), and used a glue gun to attach both to each wand. The last step was to tie purple and white ribbons around the wands. Simple but so very cute! For Lily’s Mermaid Crown, I used the template from the party plan. I cut off a piece of the fishing net and glued it, along with a small sea star and some plastic rhinestones, onto the crown. Lily loved it.

My mother-in-law pointed out that Lily’s mermaid party was our 37th birthday bash for kids. Goodness. That’s a lot of parties. But this one was truly one of my favorites. Thank you to One Charming Party for all their great ideas, and to Lily’s lovely guests and my helpers who made it such a wonderful time. Lily was one happy girl.

* Sadly, One Charming Party is no longer in business.