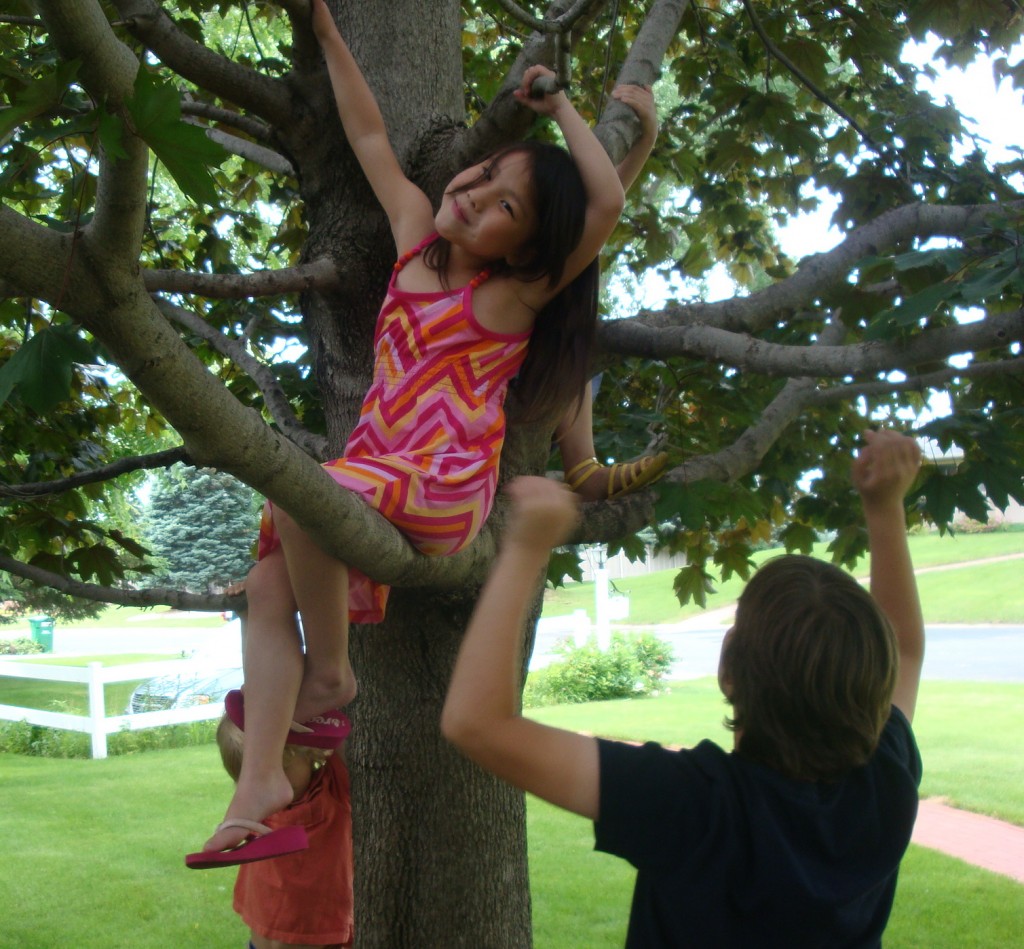 { You can climb a tree in a dress, but it’s probably harder. }

Lily has always preferred to wear dresses. I’ve been quite proud of this. As someone whose go-to outfit is a pair of jeans and a Favorite T from the Gap, I’ve happily basked in her reflected glory. When other mothers tell me that their daughters want to know why they can’t wear dresses every day like Lily, I make polite noises but inside I’m pleased to be associated with such a little style icon.

I should have known it wouldn’t last.

This morning I stood in front of Lily’s closet and asked which dress she wanted to wear.

“What?!” I gasped, looking at the row of darling new dresses I got on sale at Lands End. “What do you want to wear?”

A better person than I wouldn’t have grumbled about buying new dresses for no reason. A truly supportive mother would have cheerfully let her daughter wear what she wanted and encouraged her to just be herself. But there’s the rub: is Lily being herself or is she being like all the other kids? Or worse—is she being like me?

Sometimes the influence we parents have scares me. Do you keep a garage-door opener in your car? If so, you probably have it hooked to the sun visor on the driver’s side, right? Well, a friend of mine has a story about another friend (let’s call her Mary) who kept her garage-door opener on the passenger-side sun visor. Her new husband asked why she put it way over there. She was stumped and had no explanation other than that’s where her mother had kept hers. So Mary asked her mother about it and her mother said it was because the sun visor on the driver’s side of her car was broken.

My head spun the first time I heard that. Do we have no control at all in the face of our parents’ influence? Are we doomed to repeat their behaviors? Of course not, you say. My father smoked and I said I never would and I don’t. Or my mother never stood up for herself, but I always do. That’s all well and good, but what do we do when we’re not even aware of their influence in the first place? What if we’re the kind of person who loves to wear dresses but we give it up one day because our mother is a slacker who always wears jeans and her lack of style is overpowering us?

Okay, that sounds ridiculous even to me. Now that a few hours have passed, I’ve had time to reflect on this morning’s dress incident. Once again, as with just about every issue that comes up, I realize that this isn’t really about what it’s about. I don’t care if Lily wears dresses—Lexie quit wearing them except for special occasions years ago and I barely batted an eyelash. And it’s not like anyone was fooled for a minute into thinking I’m some kind of fashionista because of the way Lily dressed. Peer pressure is most likely playing a part in Lily’s decision to dress more casually. I’m sure she looks around and sees that most girls are wearing jeans and shirts and she wants to fit in. It probably has a lot to do with the monkey bars, too, and being old enough to care that your dress is flying up over your head.

No, I suspect my angst is coming from the same place it does when Lily draws someone with blond hair. I worry that she is turning away from who she is and attempting to be like Lexie or me. I want her to be proud of her beautiful dark hair. But this, too, is ridiculous and I can see the double-standard from a mile away: I don’t question Lexie when she draws a dark-haired person. It’s good to remember that not everything that comes up with Lily has to be traced to having been adopted. We all have our issues.

I have my own reasons for being a jeans and T-shirt kind of person (mostly involving keeping warm and a tendency to sit with my legs tucked under). Lily will develop her own style. Meanwhile, I am going to do my best to just smile and nod and hand over whatever it is she wants to wear. And keep my fingers crossed that she won’t decide to go Goth. Or worse: Self-exploitationchic.*

* Emily Grant coined this phrase on the Pigtail Pals FB page for clothing that says things like “Future Trophy Wife” or “I’m too pretty to do my homework so my brother has to do it for me.” Seriously? What parent in his or her right mind would buy that for a child?