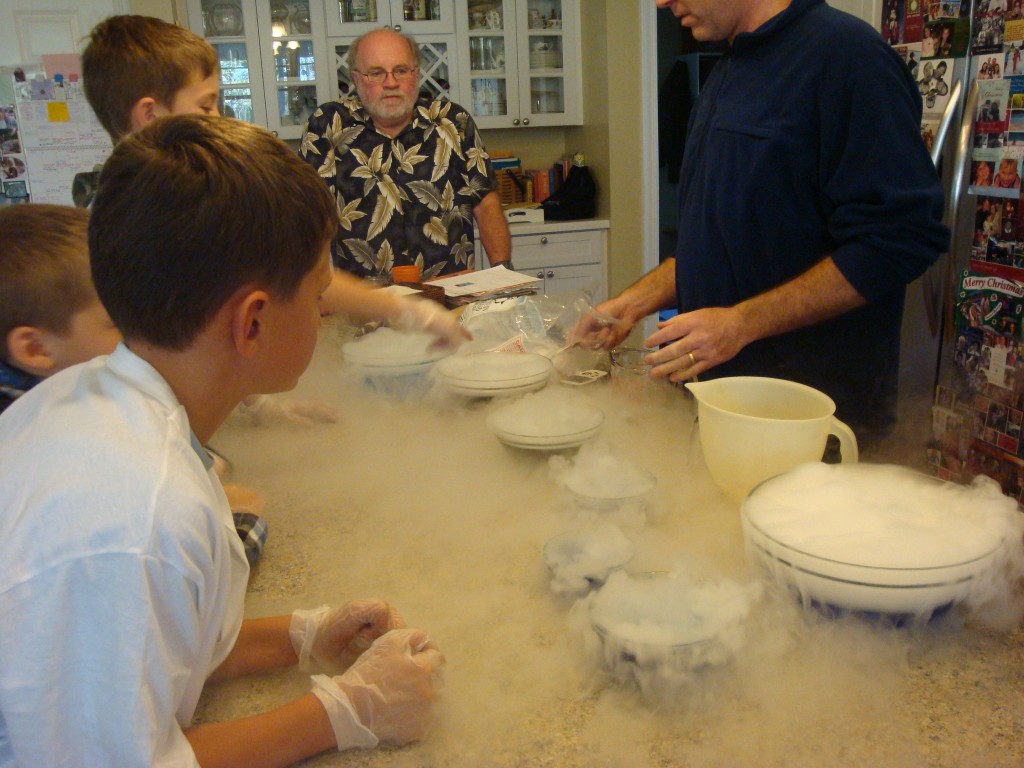 Will’s Mad Scientist birthday party was Mad Fun. I highly, highly recommend this party, especially if you don’t mind a little mess. The experiments themselves didn’t cost much at all, and you can spend as little or as much as you’d like on the extras like invitations and decorations. Make sure you have a helper or two and you’re good to go. Here’s a brief recap of what we did.

First of all, I checked in with One Charming Party to see if they had done a Mad Scientist party. And of course they had! I got lots of good ideas from them but didn’t come close to doing everything they suggested, so be sure to visit their website if you decide to use this theme.

I sent out basic party invitations, but if you have the time and energy you could get really creative and do something like rolled-up invitations in test tubes. When the guests arrived, we gave each one a lab coat made from a men’s medium V-neck T-shirt that was cut right down the middle. We printed out labels with their names (“Dr. Will,” etc.) and stuck them on the T-shirts along with radioactive symbol stickers that we happened to have from a science activity book. You could print out your own using online images and sticker paper.

After each guest was kitted out in his lab coat, we had him make a volcano out of modeling clay. The finished volcanos were just a few inches high with a hole in the top for pouring in the baking soda. We let the boys go crazy with a big box of baking soda, a big bottle of vinegar, and food coloring. (When you pour the vinegar into the baking-soda filled hole, a lava-like mixture froths up. Kids love this! Make sure you have cake pans or disposable aluminum pans with high sides for each volcano so you don’t have to worry about vinegar getting everywhere. 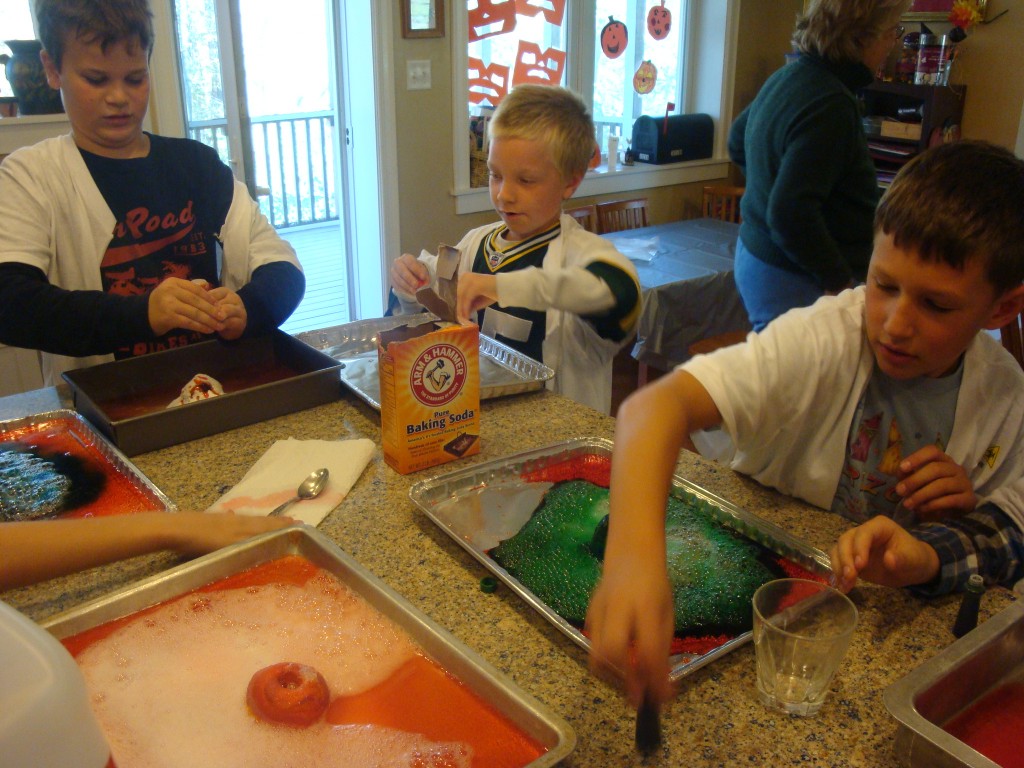 After the boys had their fill of exploding volcanos, we let them experiment with dry ice. I was a little nervous about this because I didn’t want anyone to touch it and get burned, but the boys were very careful and Tim watched over the action like a hawk. My dad picked up a 1-pound chunk of dry ice at Kowalski’s grocery store for about $7 that morning. This was plenty; Tim broke off bits of dry ice and put them in bowls and let the kids pour water over them until we ran out. The smoke billowing around the room was super cool, but the best part was the Mad Scientist Laugh Contest that spontaneously erupted during this experiment. 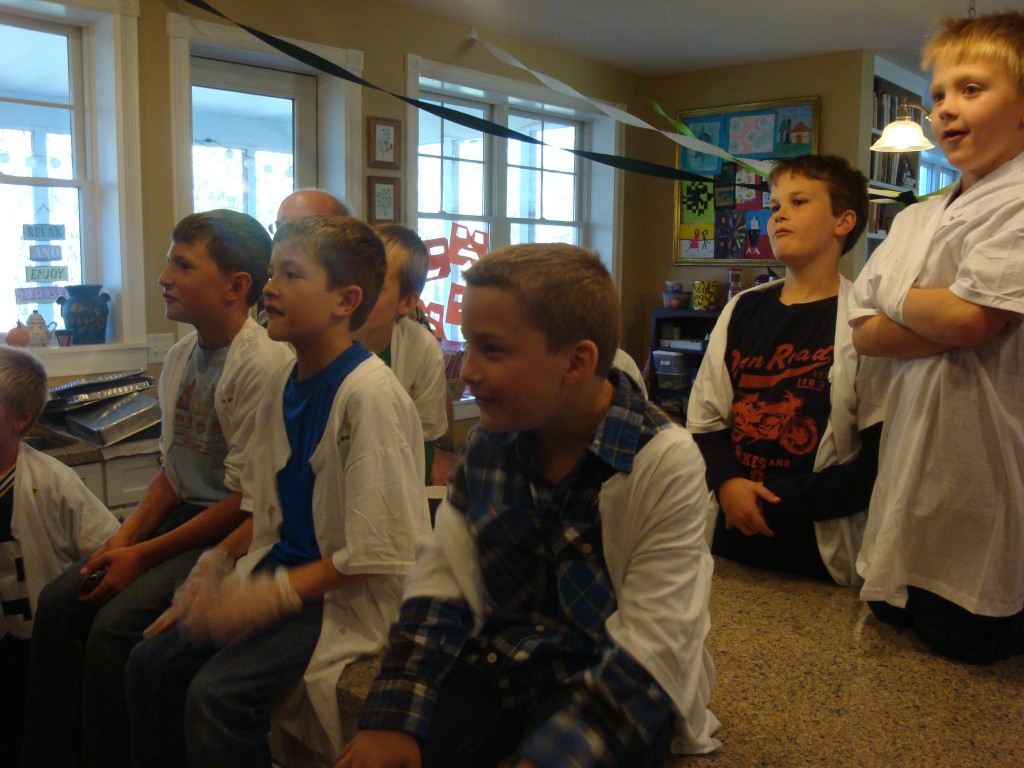 The next experiment was super simple, but really cool. It’s called Expanding Soap. All you do is soak a bar of Ivory soap in water for a few minutes. Take it out and set it on a paper towel on a microwave-safe plate. Let it dry for about 5 minutes, then place the plate with the soap on it in the microwave. Heat the bar of soap on high for about 1 1/2 minutes. Watch as the soap starts to puff up in crazy shapes. Let the soap cool off a bit, then let the kids touch it to see how strange it feels. We ended up doing this a few times because it was so fun. It was nearly as much fun watching the boys watching the soap!

After that, we did the Milk Art experiment, which I posted about here. This was actually quite calming and the boys were amazed at how the colors danced across the milk’s surface.

Next the boys headed outside for the classic Diet Coke and Mentos experiment. Do you know this one? You pop a few Mentos into a bottle of Diet Coke and run away as fast as you can before the Diet Coke comes exploding out of the bottle like a geyser. Always a hit.