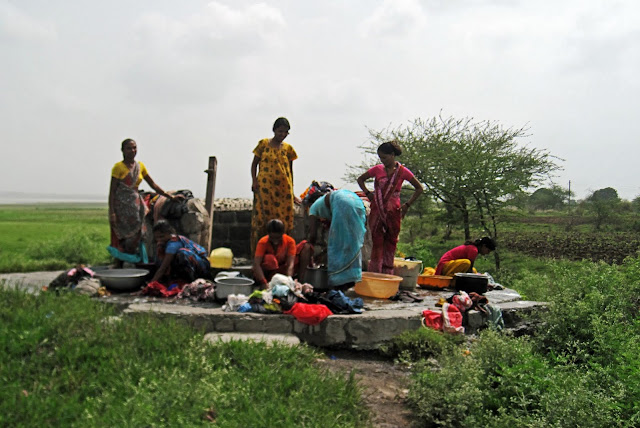 Years ago I read a story in Sojourners magazine about a woman from a small village in Africa who was visiting a big city in America. She was baffled by indoor plumbing and asked where the town’s well was. Her host explained that the city didn’t have a well and that water came directly to people’s homes through underground pipes. The woman was aghast. “But then how do you know what’s going on each others’ lives?” she asked.

If I had been there I would have said that while we don’t have a central well to gather around nowadays, we create wells all the time.

Wells spring up in obvious places, of course, like offices. One of my favorite wells was the public affairs department at Special Olympics International back in the ’90s. Those people taught me some of the most important lessons of my life. And they were a lot of fun to be around. My book club has been a well for nearly eleven years now. One morning each month I get to soak up enough wisdom and goodwill to last until the next meeting. I’ve been happily surprised that another well has sprung up at the boot camp class I teach every Saturday morning. I knew it had become a well when I almost canceled class because of my sick pup but decided not to because if one of us could show up when her father was dying and again two days after his funeral, I could leave Gunther with Tim while I took care of myself a little. I shared this with her and she was kind enough to say that I had inspired her the same way after Tim’s mountain biking accident. I could feel the water bubbling up.

Wells don’t automatically sprout up everywhere people gather. Or maybe what I should say is that certain wells might not feel right for you for whatever reason. I only lasted a year in a sorority, but I have friends who loved their houses and still keep in touch with their “brothers” and “sisters.” Even your best friend might be perfectly happy visiting a well that doesn’t cut it for you. Whether it’s an exercise class, a Bible study, or a monthly night out, when the chemistry is right, you’ll know it.

A well can be a place simply to chat and laugh and catch up. And that’s just fine. But at its best a well can be like a North Star guiding you through life and keeping you focused on what’s truly important.

Maybe we have different wells that suit us better at different times in our lives. When I was younger, I never wanted to stay in. Everything I was seeking was out. Now most of what I need can be found within the walls of my home. Tim and the kids and the animals and the house itself are endlessly absorbing to me just now and are the main well of my life. And yet there’s still part of me that wants to be out there, the part that has always longed to make the world smaller whether it was by writing for an international student magazine in college or by having a Chinese daughter.

Which brings me to blogging. I get asked all the time why I decided to blog. I was a bit surprised myself that I started a blog last year. My impression of blogs had been that they were were like perpetual Christmas letters. Not the good ones that make you smile and feel fond of the writer, but the ones that make you roll your eyes at the self-indulgent bragging. But then in the fall of 2010 I discovered a world of creative bloggers—some moms, some not—who shared ideas and insights and do-it-yourself projects. I had stumbled upon the most amazing well, populated by fascinating women. There was an Irishwoman writing about life on a llama farm in France, a designer sharing stories about moving her family of eight to a small village outside of Paris, a newlywed talking about books and food and spirituality in New York City, a young mother sharing thoughts and ideas on living the creative life in Wyoming, and so many more. Books! Recipes! Knitting! Travel! Free printables! Living with intention! These were my kind of people. And I didn’t even have to leave my house.

I must have talked to Tim about this a lot because he finally said, “Why don’t you start your own blog?” And so I did.

Blogging has become a wonderful well for me. With so many things pushing and pulling me in so many directions, A Mom’s Year acts as my North Star, asking What is important right now? What’s worth writing about and sharing with others? Some days I’m thinking about the Big Questions but other days it’s all about playdoh. Actually, most days it’s about playdoh. And with a seven-year-old around, that’s as it should be.

So in answer to those who’ve asked if I’m going to keep writing the blog, the answer is yes. I’m having fun and this well isn’t even close to drying up. There’s a fresh new year ahead! I’m grateful for the people who read the blog regularly and those who pop in now and then. When someone subscribes, it’s like Christmas. And I’m especially grateful to the other bloggers out there who’ve created this new kind of well for the new millennium.

Happy Weekend and Happy New Year!
How to Play Scrabble with a Teenager