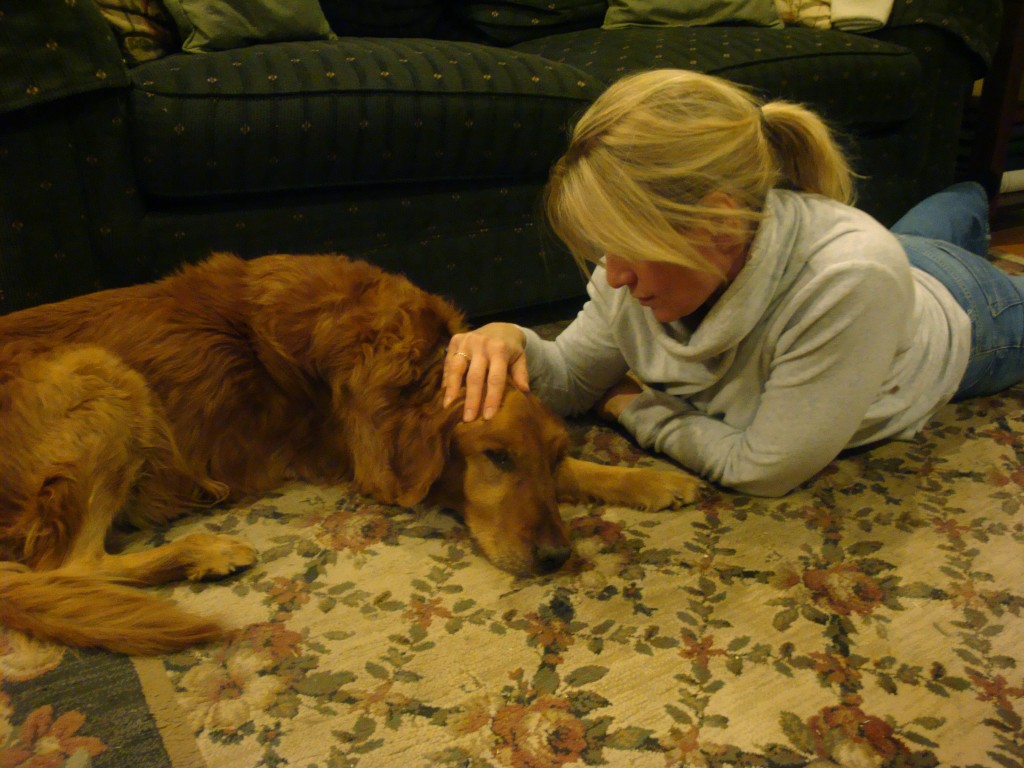 Gunther has always kept one eye on me, but now I’m the one doing the watching. In the two weeks since he was diagnosed with liver disease we’ve transitioned from trying to patch up his liver and buy more time to preparing ourselves to say goodbye. There’s no escaping the fact that it’s excruciatingly painful. But as with anything in life, there are moments of grace to keep us going.

For one thing, we have a wonderful veterinarian who is guiding us through the process of letting Gunther go. I have so many questions as I try to understand what’s happening and what’s best for Gunther and she does her best to answer all of them. But she admits there are many unknowns. And much of what we do know comes from humans because animals can’t tell us exactly how they’re feeling.

And as I think about it, the experiences I’ve had with death are helping now. Some of the decisions Tim and I have made about how much to put Gunther through in our attempts to “cure” him were influenced by my Grandpa Ed. Grandpa Ed was diagnosed with lung cancer when he was 71. After trying various treatments, he decided to stop everything and just enjoy Christmas with his family. I remember that Tim and I bought him the most expensive bottle of scotch we could afford on our newlywed budget. The family passed the bottle around and when it was my turn to take a swig, I learned what “smooth” really means. Grandpa had fought the good fight, but in the end he wanted to finish life on his own peaceful terms.

Another lesson came from an editor I worked with years ago whose husband was dying of cancer. (I’ll call her Irene.) Irene lovingly nursed her husband through a long, painful illness. And when they thought it was the end, they said beautiful goodbyes, expressing everything they needed and wanted to say. But then he didn’t die. Not just then, anyway. Irene told me, with a wry smile, that it was a little like running into someone you hadn’t seen for a while at the grocery store. You have a fabulous conversation and then say goodbye, only to see him again in the next aisle. It can feel a little anticlimactic.

Every night I have no idea if Gunther’s going to make it through until morning, so I just tell him how much I love him and that it’s okay to let go and what a good dog he is. I’ll keep saying my goodbye speech night after night for as long as he’s here.

The thing I learned that might help the most is that sometimes when someone is dying they need to do it when you’re not around. After staying close to her husband’s side through the last days of his illness, Irene was devastated that he died when she made a quick trip to the airport to pick up a relative. Not only was she overwhelmed by grief, but she also felt guilty for feeling betrayed by her husband for sneaking out of this life when she wasn’t looking.

Grandpa Ed passed away shortly before Irene’s husband. As usual with our huge family (eight kids, plus sons- and daughters-in-law and grandchildren), there was a crowd at the hospital when Grandpa was given Last Rites. There was always someone with him, so the family was taken aback when Grandpa took his last breath in the ambulance carrying him to hospice. But I think a family- and people-loving person like Grandpa couldn’t let go with so many of us holding him back.

I didn’t have much to offer Irene after her husband died, but I told her about Grandpa and it seemed to help her find some peace. Gunther and I have been together nearly every minute for the last two weeks, but I understand that he might move on when I’m not here.

Do you think it’s strange for me to compare humans to a dog? It doesn’t seem strange to me at all, but then I think that love is love. My boy is curled up next to me on the floor, his breathing sounding a little more labored every day. In between typing I stroke his head—gently, because I don’t want to hurt him. He looks up occasionally to check that I’m still here, but mostly I’m the one doing the watching. Watching and waiting to see what happens next.