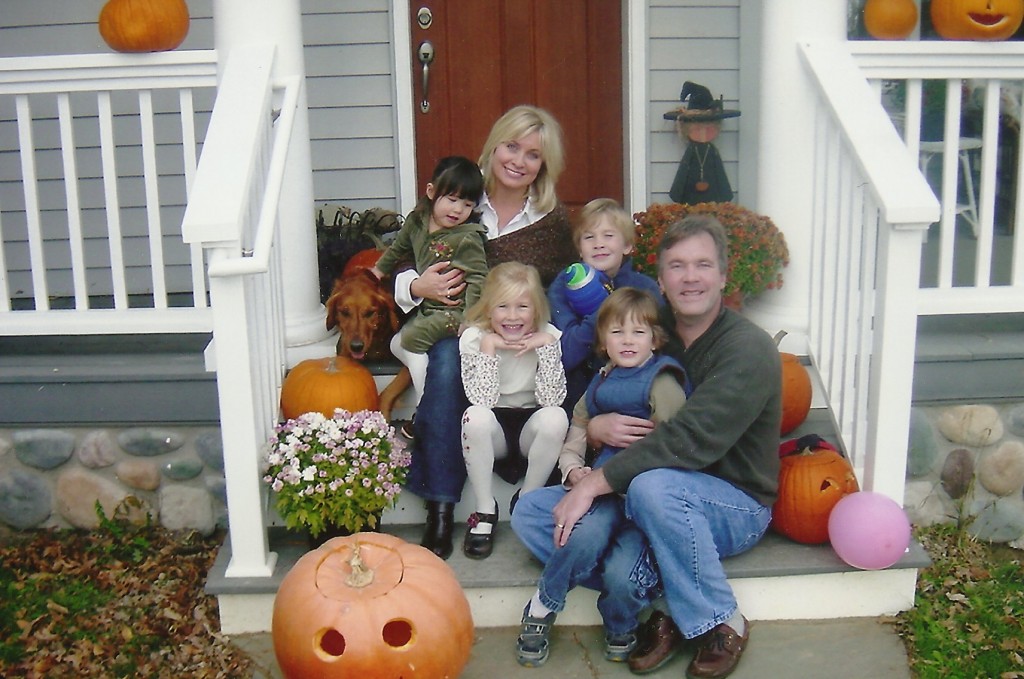 January in Wisconsin is usually so cold you can throw boiling water into the air and watch it freeze before it hits the ground. But this past week the weather was unusually warm, with temperatures reaching into the 50s.

Meteorologists would probably say the balmy temps were caused by el Nino or something like that.

But I believe that the heavens themselves created a sanctuary for our beautiful boy, Gunther, to soak up all the warmth and sunlight his failing body could desire. God couldn’t give Gunther a new liver but He gave him one more spring. Right in the middle of winter.

Is it any surprise that God would do that for a dog who gave so much?

As someone who met her future husband at a party more than 1,000 miles from home and has a daughter from China, I’ve long been a believer in the Red Thread theory. According to the theory, an invisible red thread connects those who are destined to meet, regardless of time, place, or circumstances. The thread may stretch or tangle but will never break.

The way Gunther came into our lives only makes me believe it more.

We were in the process of adopting Lily and the last thing I was thinking about was getting a dog. Tim and I had rescued a beagle named Molly the first year we were married. She was a sweet girl and when she passed away we missed her, but she was such a handful that I couldn’t imagine taking on another dog with three young children and plans to adopt a fourth.

But then one day in October 2004 everything changed. We were supposed to meet my friend Patti and her kids at the Children’s Museum, but she called that morning to say there was a stray dog hanging out in the yard with their German shorthaired pointer, Eddie. Some people might’ve gone on with their day and not worried about a stray dog. But Patti’s the type who volunteers at animal shelters and she wanted to make sure he was okay.

What kind of dog is it? I asked.

I know, she said.

Maybe we’ll just come over and look at him, I said.

He was skinny and muddy. A complete mess. But when our eyes met, something clicked. I offered to bring him home with us. I called Tim on the way and asked him to meet me in the parking lot at his office to check out this dog. I don’t know that Tim was very impressed by the scraggly creature sitting in the front seat. But the brown eyes and wagging tail must’ve worked on Tim, too, because all he said was, “I’m not opposed to the idea of having a dog.” I took that as a “yes.”

We went through the proper channels and had him scanned for a microchip and checked all the missing dog reports. But finally, the director at the local Humane Society gave us her blessing and Gunther officially became part of the family. 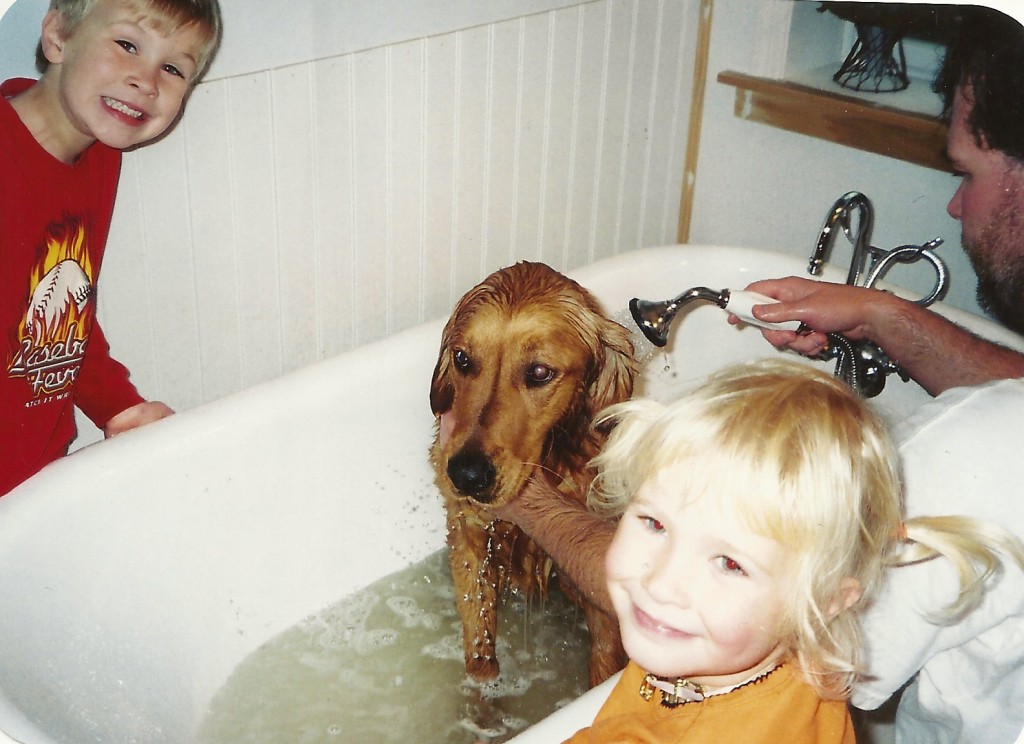 { Gunther getting a bath his first night with us. }

If I had to make a living writing about Gunther’s misbehavior, a la Marley, we’d be broke. The truth is that Gunther behaved better than the rest of us put together. On the rare occasions when he did something he wasn’t supposed to, it was because of a lack of communication.

Like the time he ate an entire pumpkin pie his first Thanksgiving with us. I scolded him and he was abashed, but not very. No one had told him not to eat the pie. So I explained the rules and he never did it again.

That’s how it worked with him. He was so smart. And so patient. The kids—and Tim—could do anything to him and he’d eat it up.

What Gunther loved most in life, besides his people, was going for long walks in the woods behind the house. He would hurl himself into the river and splash around, grinning crazily. He loved chasing lacrosse balls, too. Every morning while the kids waited for the bus, Tim would throw balls with his lacrosse stick and Gunther would chase them down.

Even yesterday when he barely had enough strength to stand, he tried to run after his ball. My heart leapt, thinking that maybe he had more life left in him after all. But he curled up on his bed and didn’t get up again after that. Dr. Brown came to the house and helped him, and us, take that final step, and then he was gone.

As hard as yesterday was—and it was so, so hard—I knew today and the days to come would be even harder. I dreaded the moment when everyone would leave and it would just be me alone in the house. I miss hearing the thump every time he’d drop down at my feet. I’m afraid of how much it’ll hurt the first time we come home and he’s not there to meet us at the door.

But as much as it hurts right now, I’m more afraid of it not hurting. I have his collar and tags in my pocket and I keep reaching in to feel their weight in my hand. The little jingling sound is painful, but it’s all I have to hold onto right now. I know that some day I won’t need that and the thought feels so cold and disloyal. I want Gunther—and the whole universe—to know that he was loved and that he mattered. I don’t ever want to forget him.

I know I’m not alone and that helps. So many of you have shared your stories of painful goodbyes with the dogs and cats you’ve loved. I’m glad to be part of this special group that loves so fully even though we know it won’t last nearly as long as we want it to. 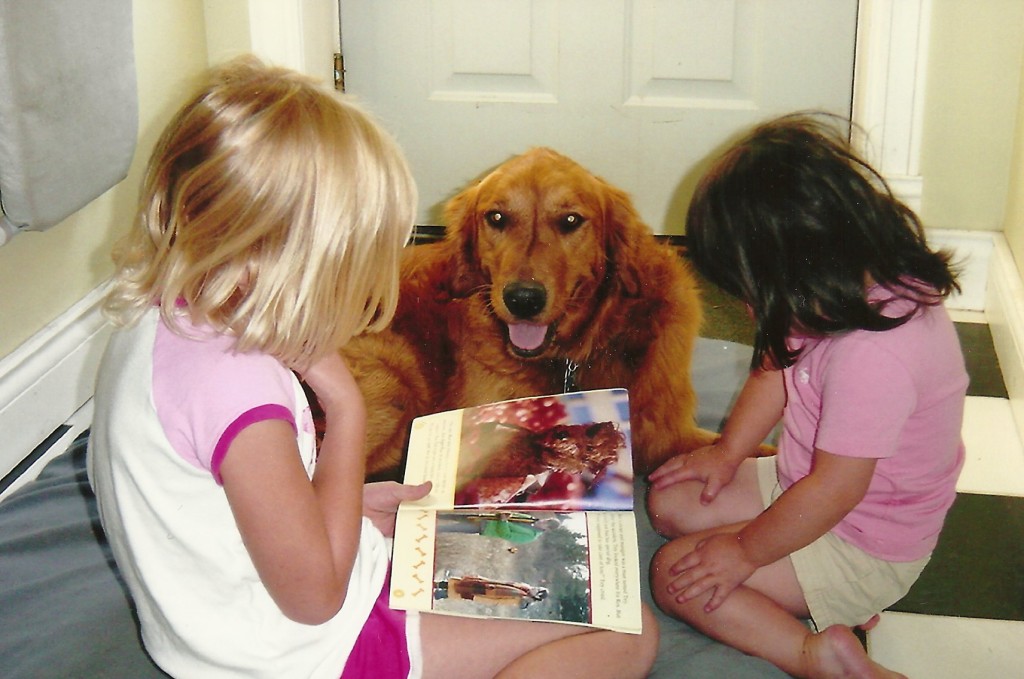 As I look back over the years Gunther was with us, I can’t help but believe his presence in our lives was on purpose. We’ve been through some tough stuff, but he was right there with us through it all, a loving and reassuring presence. He was an angel watching over Lily as she left the only world she knew to come be part of our family. He made me want to be a better person, and I hope with all my heart he’s still here somehow to help me try to be as patient and generous as he was.

The spring-like days in the middle of January were a gift, and when the arctic winds started to blow in from the north yesterday it felt like we were gently being told it was time to let Gunther go. When the snow began to fall, it felt like a benediction.

Goodbye, Gunther. We will miss you.

Our wonderful Will turns 18 today. 18! Oh my heart