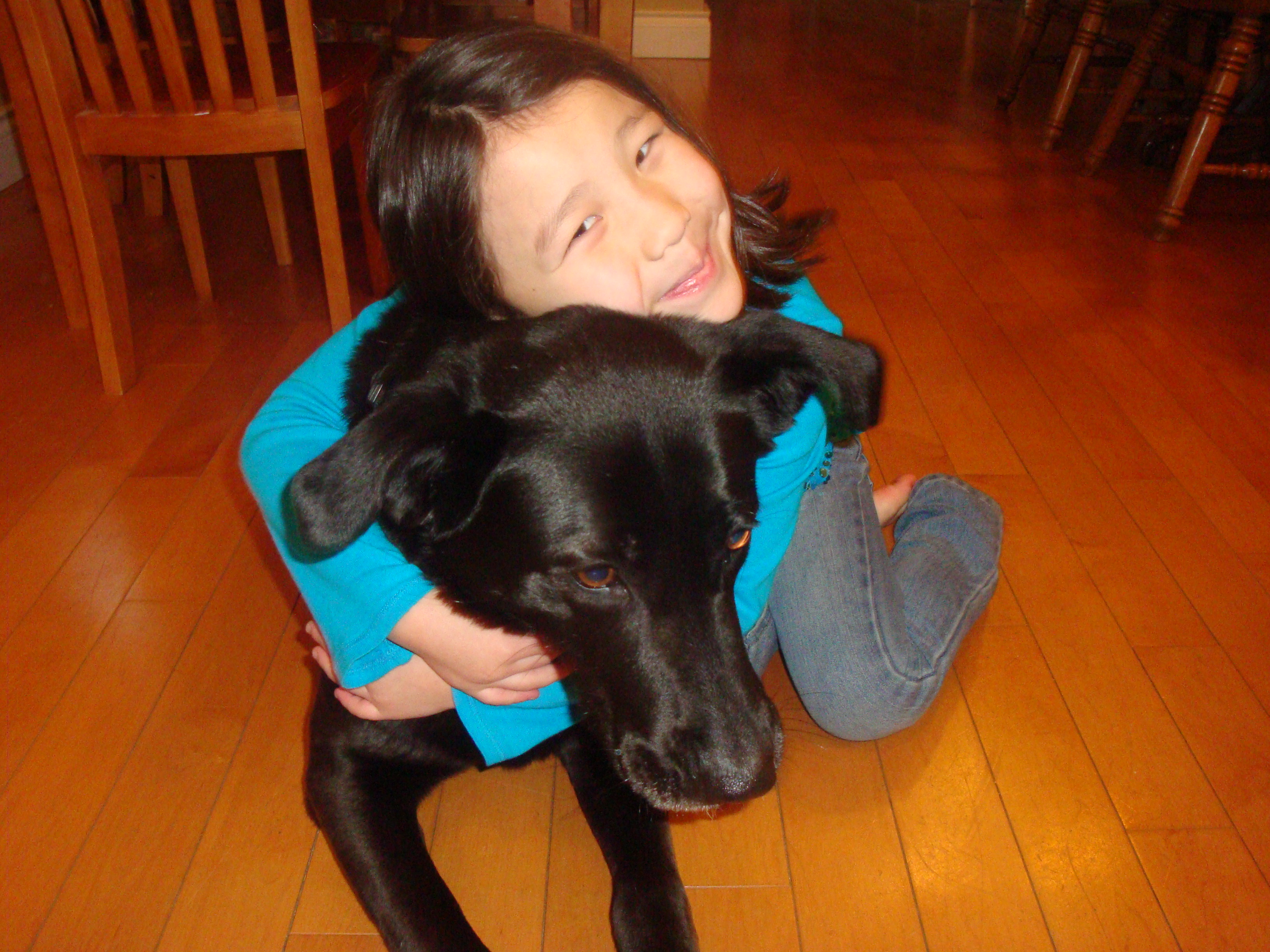 I knew the call was going to come.

The phone rang yesterday morning and it was Dr. Black.* She told me that she had been shuffling some papers around on her desk and had come upon the thing I’d written about Gunther when he passed away six weeks ago.

After asking how we were coping, she sort of stumbled around a bit. I waited. And then she said, “I don’t ever do this. In fact, I should hang up right now.”

Pause. “We have this dog,” she said. And she went on to explain how a female dog had been left at the clinic a few weeks ago by a man who wanted her put to sleep. The dog had belonged to his son, but his son hadn’t taken care of her. So the dog ended up with the dad, but he didn’t want her, either. But she was a great dog and they couldn’t bring themselves to put her down. She had been living at the clinic during the week and then going home on the weekends with a teenager who worked there after school. But her parents didn’t want a dog.

And so Dr. Black thought of us.

I asked a bunch of questions. What’s her name? Leila. How old is she? We’re not sure. The man said six, but that might have been to make himself feel better. Her teeth are really clean, so she might be closer to three. Is she healthy? Yes, although sometimes she limps a little in one leg. We did an X-ray, but didn’t see anything wrong. How is she with kids? She’s a wonderful dog. She gets along with everyone.

I told Dr. Black I needed to talk to Tim, but I’d call her back. After I hung up, I burst into tears.

You see, earlier this week I had started to write about Gunther and what it’s been like without him. And I was using the analogy of a bruise. You know how when you have a bruise, you keep pressing on it to see if it still hurts? Well, my bruise was still hurting. A lot. I had planned to write about how I still dreaded coming home to an empty house and how sad it was now when people came over because there was no welcoming bark and ecstatic reception. And that I missed him laying companionably at my feet while I worked at the dining room table. I was going to write that I wasn’t even close to wanting another dog because I was still trying to find a loophole to get Gunther back.

If I had thought a “bruise” was bad, then this phone call felt like having stitches ripped out. I’m not ready. What are you playing at, God?

But. I know our vet wouldn’t have made this request lightly after seeing what we went through with Gunther. She has two goldens of her own and knows how wonderful they are. She has four kids, too, and understands that when you’re up to your eyeballs in children, you need a dog who is smart and well-behaved and—this might seem like a strange word to use about a dog—supportive.

The truth is that I knew Dr. Black would be the one to give us our next dog. Even though vets don’t normally do this sort of thing, I just knew. It was sooner than I had wanted or expected, but this is exactly the way I had hoped a dog would find its way into our lives.

When I could talk again, I called Tim. I explained the situation and he said, “I’m not opposed to getting a dog.”

And so the younger three and I went to the clinic after school. (I know my oldest well enough to know that he wouldn’t be onboard at first. Better to let him go to after-school weight-lifting and break it to him later.) And Leila was very charming and friendly and since she didn’t bite anyone there wasn’t a reason not to take her. I told her, “I know you’re not Gunther. But maybe we can help each other.” She leaned against me. I took that as a yes.

When we got home, I spent a good part of the evening sobbing. Mothers usually try not to cry in front of their children, but I really couldn’t help it. And, anyway, they sat through Toy Story 3 with me. At this point, it felt like someone was pouring rubbing alcohol into those metaphorical stitches. Because even though Leila’s is sweet and tries harder to hug you than any dog I’ve ever met, she isn’t Gunther.

Tim knows me well and several times last night he said, simply, “She needed a home.” Which is shorthand for you’re not being disloyal or replacing Gunther or forgetting about him. I put Gunther’s collar and tags on her for now. Hearing the jingling sound feels good, and if it makes it seem like Gunther’s here, well, so be it. It’s nice having a dog to trip over when I get up. Leila was upstairs with the kids last night and didn’t meet me at the door when I came home from tap, but she doesn’t know me well enough to be excited when I get back.

But she’ll get there. So will I.

* Tim, who spends much of his time reading contracts and lives in a more litigious world than I, wondered if I should use our vet’s real name. So I’ve changed her name in case people get the idea that she’ll try to foist dogs on them.