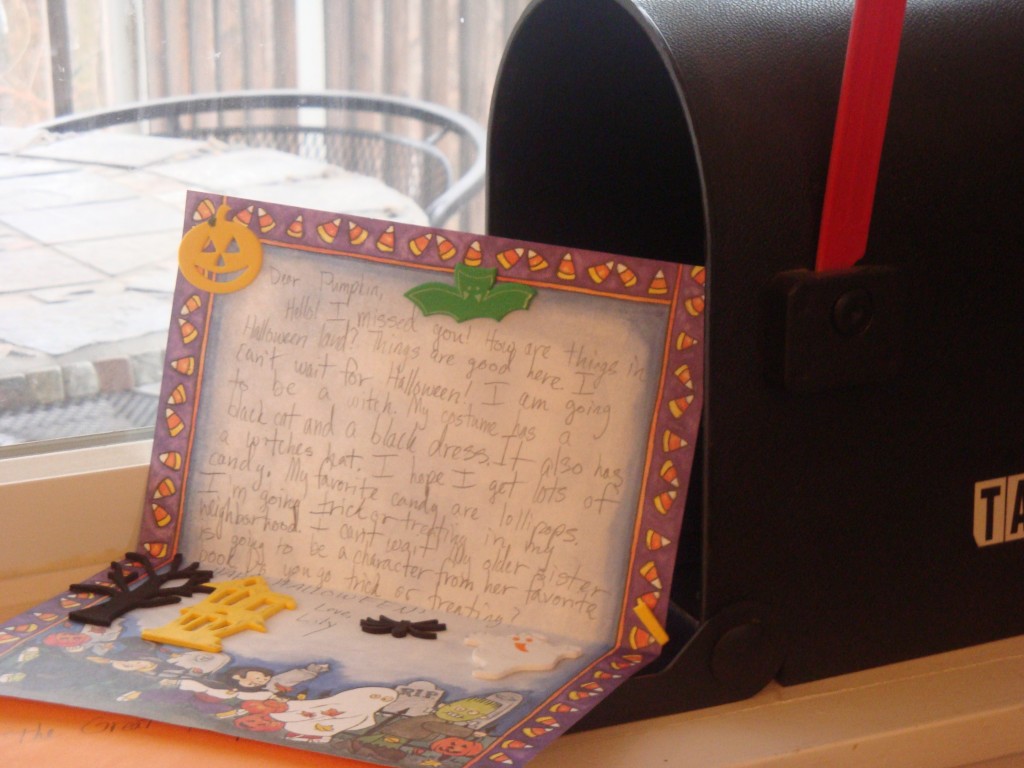 We’re having an Ice Day here in western Wisconsin. Not a get-out-and-play, make-a-snowman, go-sledding Snow Day, but a rainy, sleety, stay-inside Ice Day. Which is fine if you’ve got a pile of good books, a new dog, and a copy of Hugo from Netflix. (Have you seen Hugo? It won so many Oscars I thought we should check it out.)

The younger three are playing “Hunger Games” right now. I don’t even know what to say about that except that it’s involving a lot of makeup and hollering. I was informed that I’m the Gamemaker, so as long as I grimace at them now and then, I think I’m free to share this activity with you.

It all started when Lexie had just turned four and our neighborhood got new mailboxes. Tim stuck the plain old black plastic one on a shelf in the garage. Lexie spied it sitting there and asked if she could have it to play with. Of course, we said. So she wrote a letter, mostly pictures and a few simple sentences (with a little help), to the Great Pumpkin, stuck it in the mailbox, and put the flag up. And then she waited, with all the faith and trust of a four-year-old, for a response.

So I wrote her a letter from the Great Pumpkin. It went along the lines of “Thanks so much for writing. Did you have a good Halloween? I loved your costume. The family and I are enjoying a nice beach vacation after our busy season. You can imagine how crazy it gets around here during October. I hope you have a great Thanksgiving and Christmas. We’ll see you next year.”

I read the letter to Lexie and she was pleased. She sat down and wrote a letter to the Easter Bunny. And so it went.

The thing I like about the Magical Mailbox is that it’s an inexpensive and simple way for kids to practice reading and writing. It’s a great exercise for using your imagination, too. And I like the idea of keeping the art of letter-writing going. We happened to have an old mailbox on hand, but you could pick one up for about $15 at a home improvement store or even use one of the colorful little decorative ones you see in places like the dollar section at Target.

Over the years, letters have been sent to and received from pirates, princesses, favorite book characters, and historical figures. At the moment I have to answer a letter as Peeta from The Hunger Games. Maybe I’ll include a recipe for bread…

Dogs = Cure for the Blues
Remembering What Matters Most