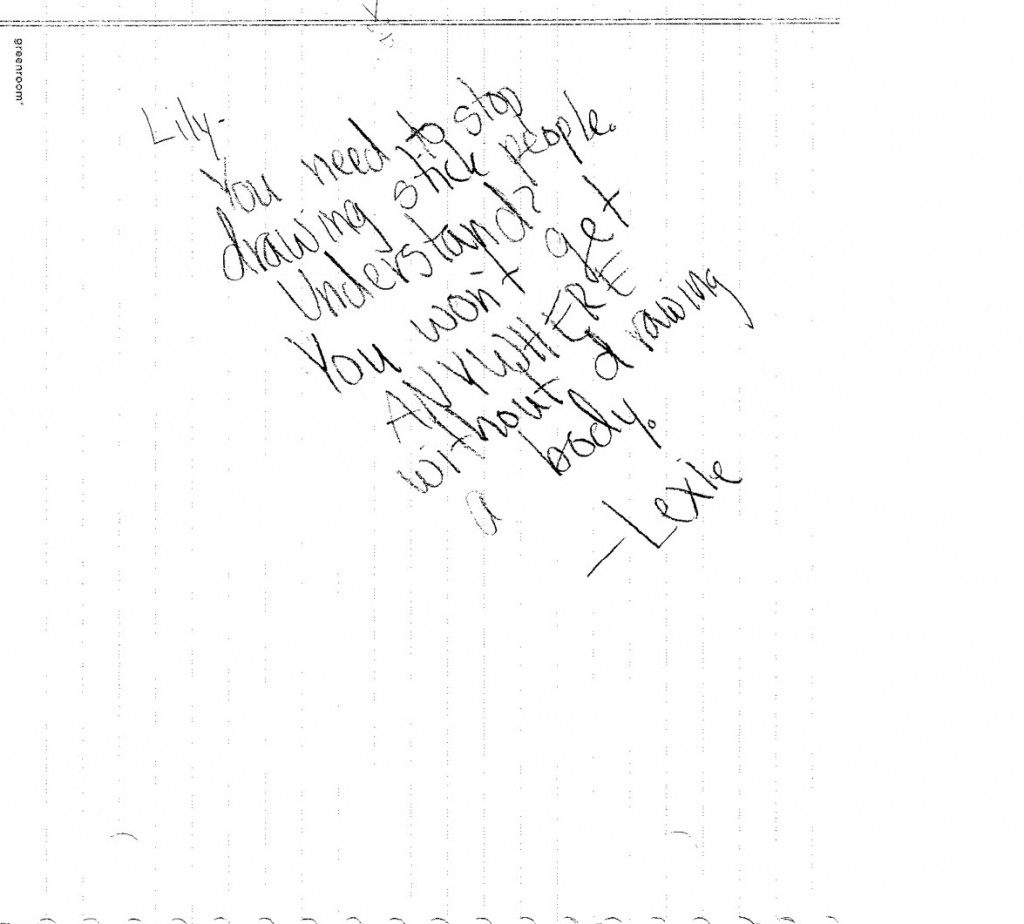 I came across this note on Lily’s dresser the other day, and it made me smile. Lexie has become a really good artist and Lily, who is four years younger, often compares her artwork unfavorably with Lexie’s. We all remind Lily that she’s much younger than Lexie and that Lexie is so good at drawing because she practices a lot. If she practices, she’ll get better, too.

The note reminded me once again that our children have so much to teach us. Every day, Lexie reminds me not to be afraid to take risks and to be less concerned about what others think. She calmly turns her back on the “popular” choices again and again to follow her own path. She doesn’t allow herself to be pulled into anyone else’s drama, which let’s face it, is a huge energy drain. When Lexie was in second grade, her teacher shared a story about how one of the boys in the class announced that he and Lexie were the smartest. To which 7-year-old Lexie replied, “Don’t drag me into this.” Oh, the stuff I’ve let myself get dragged into! The mental energy I’ve expended on problems (real or imagined, and aren’t most of them imagined?) that pulled me away from things that would’ve filled my life with meaning and purpose.

Like writing. Every night I catch Lexie out of bed, typing away furiously on the computer in our office. At this point, I’ve usually collapsed on the sofa to watch re-runs of “Friends.” But Lexie, who has had an equally long day of school followed by dance class or art club or volleyball, courageously meets up with her muse (and, yes, it takes courage) for these late-night creative sessions. My muse accuses me letting myself get distracted by obligations and the expectations of others as an excuse to avoid the risks—and possible failures—that are inevitable when you “throw off the bowlines and sail away from the safe harbor.”

For the first year of her life, Lexie would not deal with anyone other than me. Not Tim, not my mother. No one. Oh sure, she’d smile at them and occasionally let them hold her. But when she wanted me, that was that. I’d never seen such an iron will in my life. Lexie spent her first year strapped to my chest, quietly and peacefully watching the world from the safety of a Baby Bjorn.

Lexie was so very shy, though, that I worried about how she’d handle her first birthday party. We weren’t planning anything too overwhelming, just the grandparents and a few close friends and their children. But it was still a lot of attention. The big day came and we watched in amazement as Lexie toddled around, chatting and flirting with all her guests. Who was this child? And then I realized that every now and then Lexie would disappear into her bedroom and flop down on the beanbag chair. Just for a minute or two, and then bounce back up, ready to face the crowd again. Somehow, at the age of one, this child knew what she needed in a way that many of us adults are still trying to figure out.

(She still does this, by the way. At the beginning of every school year, her new teacher wonders if there’s something wrong because this girl who had been so social is suddenly walking around the playground by herself. I explain that, no, nothing is wrong; she just needs time to recharge her batteries.)

I understand that Lexie and I are different and that my greater desire to “connect” has its benefits, too. But I know when I’m taking it too far and using the “busy-ness” as an excuse. And that’s when I need to tap into my own iron will, channel my inner Lexie, and not let anyone or anything—not even my own weariness, get in the way of pursuing those dreams.

Drawing stick people is safe and comfortable. But if you don’t take the plunge and draw a body, you’ll never get anywhere.