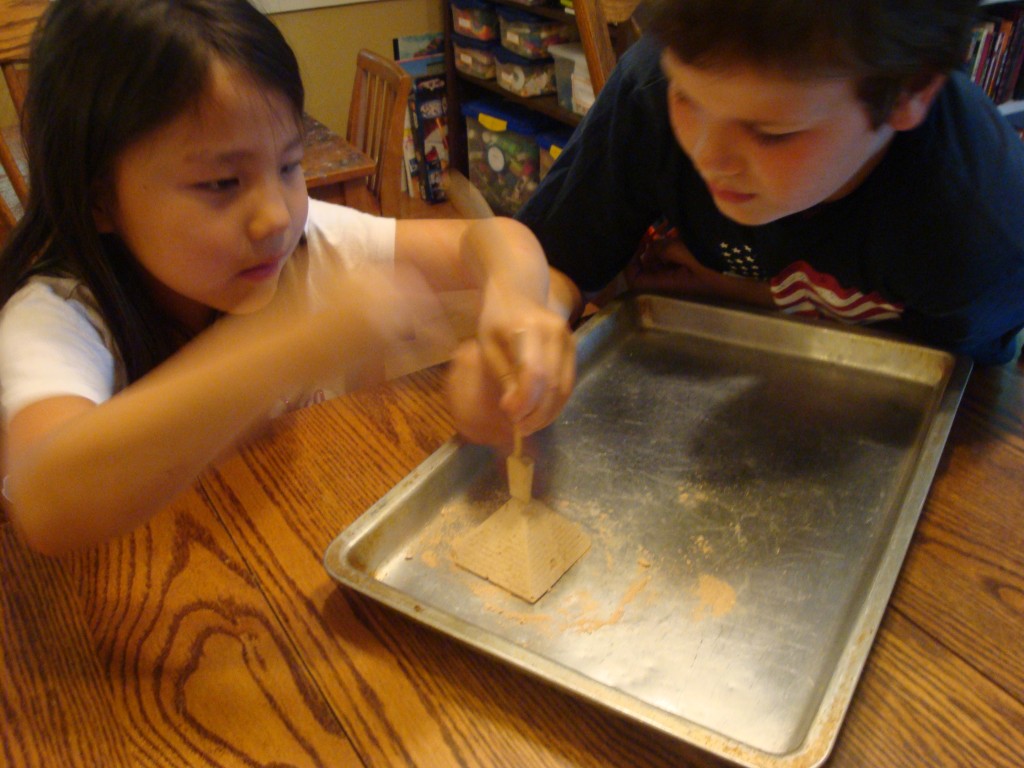 This week’s featured country is Egypt. To get started, I asked the kids to list everything they could about Egypt. They came up with:

Great list! Now I just have to look it over and see what we can realistically pull off in a week.One of the reasons we picked Egypt this week is because we’re just finishing up The Serpent’s Shadow, the third book in Rick Riordan’s Kane Chronicles. The books are all about Egyptian mythology, plus he’s covered pyramids, the Sphinx, excavations, and King Tut. Thank you, Mr. Riordan.

The other reason we had to get to Egypt quickly was because Will couldn’t stand to wait any longer to get his hands on the Pyramid Dig Kit. Ours came from Little Passports, but you can find similar kits online. After a blessedly long time spent digging, the kids excavated a small statue of an Egyptian queen.

Will can be in charge of reporting on the Roman Empire’s invasion of Egypt and Lily can help me prepare couscous. When I worked at Special Olympics International, my friend Julie made a delicious dish with couscous, potatoes, and carrots. I’ll have to ask her for the recipe. Lexie remembers reading about a drink called sahlab in one of Riordan’s books. I found a recipe for sahlab here, so we can give that a try, too. And we can listen to Putumayo’s fantastic Arabic Groove CD while we work.

Lexie suggested that we worship Nisa the Cat for a day. I said that Nisa already thinks we do. You know how cats are.

That just leaves digging out Kipling’s story “How the Camel Got His Hump” (which I remember vaguely from my childhood) and ordering The Prince of Egypt from Netflix.

If you’re interested in doing something like this, just remember that it doesn’t have to be a big deal. Even if you just locate Egypt on the map and have a conversation or two about it, you’re teaching your kids that there’s a big world to explore.