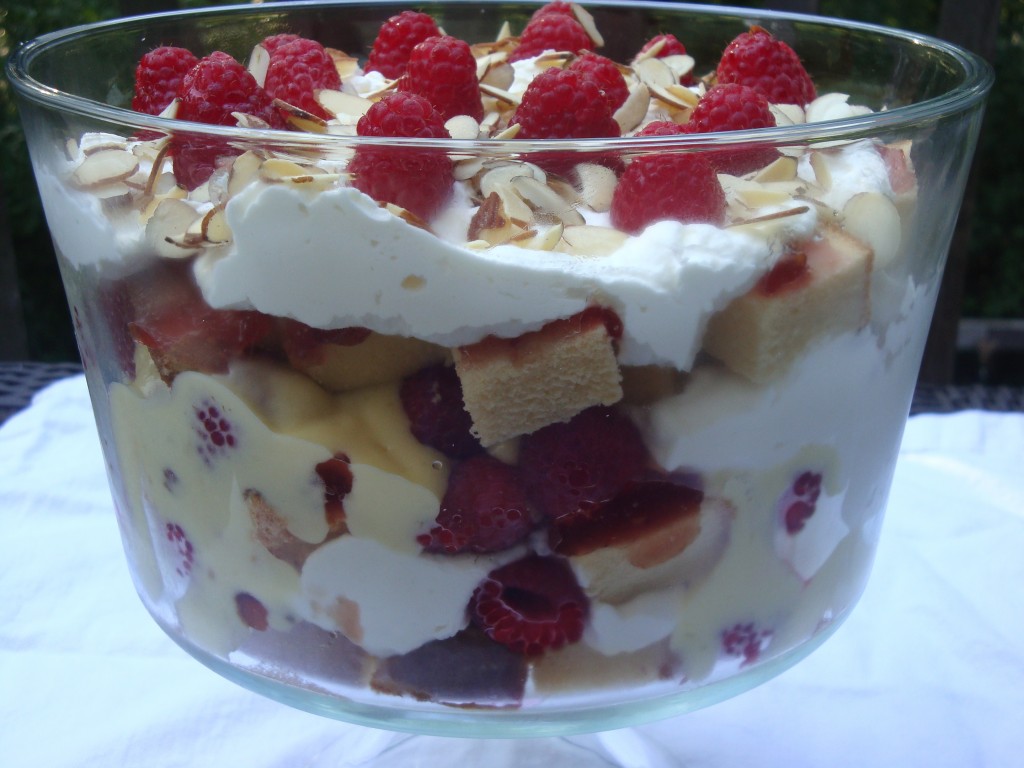 I totally forgot to post the trifle we made during England Week. The kids and their schedules are driving all thoughts from my brain. Actually, it’s not them—their schedules aren’t too crazy at the moment. It must be Olympic Fever!

Have you ever had trifle? It’s a crazy-good English dessert made from custard, fruit, sponge cake, whipped cream, and (in some versions) sherry. You can get really creative with trifles: my mom makes a fantastic version with angel food cake, strawberries and bananas, and pudding, and my boss at the publishing company made one with gingerbread, whipped cream, and butterscotch pudding. Delicious.

For ours, we stayed fairly true to the traditional English variety. Which meant we had to make custard from scratch. Custard is tricky, if you ask me. Mine never seems to get thick enough even though I stir it forever. But it has such a nice, rich flavor, it’s probably worth the effort. Since we didn’t use sherry, the jam had to provide the moisture to soften the pound cake, so this tasted better the second day.

Spread a little jam on each piece of cake and place in the bottom of a large glass bowl. Sprinkle with one-third of the raspberries.

To make the custard, heat 10 ounces of heavy cream in a medium saucepan over medium heat. While the cream is heating, beat the egg yolks with the sugar until pale yellow. Pour the hot cream over the yolks and stir rapidly. Return the mixture to the pan and cook over low heat, stirring until thick (about 10 minutes). Remove from heat and let cool.

While the custard is cooling, place the sliced almonds on a baking sheet and toast in a 300 degree oven until golden. Next, whip 10 ounces of heavy cream until soft peaks form.

Spread the cooled custard over the cake in bowl. Spoon a layer of whipped cream over the custard. Repeat the layers until you’ve filled the bowl. Sprinkle with toasted almonds and chill for at least two hours before serving. Enjoy!