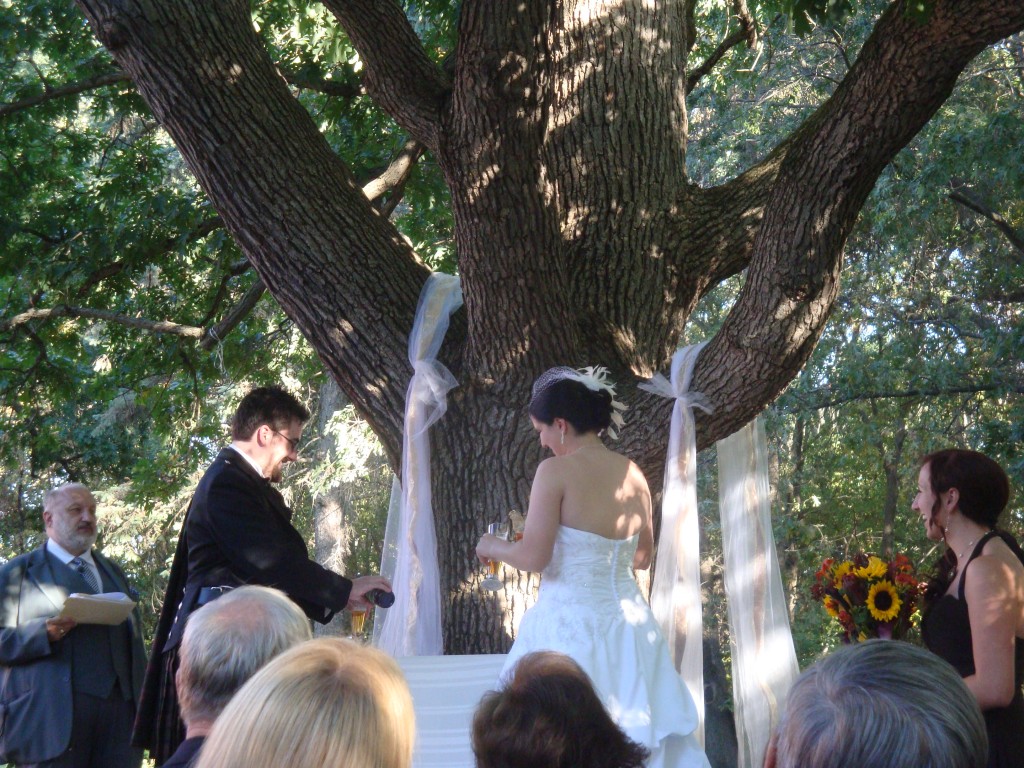 Last week my young cousin Dylan married his love, Kathy, under the branches of a white oak on a beautiful autumn day. I adore all weddings, but so many things about this one still have me smiling.

+ Men in kilts! Dylan and his groomsmen—and a few guests—donned kilts for the occasion. There’s nothing like kilts to set a tone of Anything Can Happen.

+ The program. Instead of just listing the members of the wedding party, Kathy and Dylan included a short bio for each. It was a fun way to get to know them all a little and see how they’re connected to the bride and groom.

+ My aunt, Dylan’s mom, walking down the aisle. She looked absolutely radiant, singing along to Christina Perry’s “A Thousand Years.” Sometimes it just hits you, how quickly time passes. I was in Joan’s wedding and here I was with my own family at the wedding of her son. And she’s a cancer survivor, so seeing her looking so happy and beautiful and well had me digging for a tissue earlier than I usually do at weddings.

+ Unity Cup. Instead of lighting a unity candle, Dylan and Kathy poured cider and ale together into a cup. I didn’t catch what set them giggling, but it was a very sweet moment.

+ Beauty and the Beast cake topper. I guess that makes Dylan the Beast, but he didn’t seem to mind. There’s a great story about the cake. Apparently, Kathy’s non-baker brother, Phil, upon hearing how much people were charging for wedding cakes said, “I can make your cake!” And he did. He wisely chose red velvet because how can you go wrong? Delicious.

+ Truffle favors. Kathy’s sisters made four different kinds; let’s see if I can remember them correctly: White Russian, Salted Rum Caramel, Strawberry Champagne, and S’more. Ours were gone before dinner.

+ Nerd trivia. Kathy and Dylan are self-proclaimed nerds, but if they are, they’re very charming nerds. Dylan is a filmmaker and Kathy is a zookeeper (is that the correct term?), so they made up little trivia cards featuring questions about movies or animals. Very entertaining.

+ Dancing. Boy, did we dance. Lily was reluctant to get out on the floor at first, but she got over her shyness quickly. In fact, at one point the bride and her entourage were dancing in a circle and there in the middle were Lily and her cousin going to town.

+ Lexie catching the bouquet. She promised she wouldn’t get married any time soon.

We had a wonderful time and I tucked away ideas for some day. I’m determined to learn how to make those truffles and if I do, I’ll share it here.