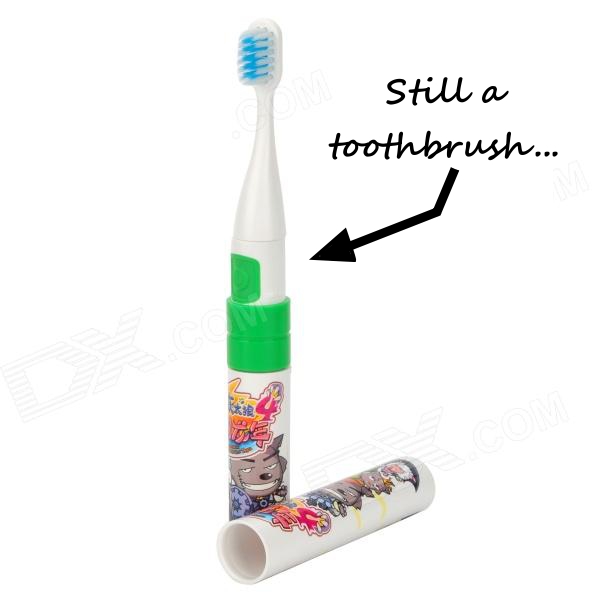 One night several years ago, Andrew went to brush his teeth and discovered that the battery for his electric toothbrush had died.

At least 5 seconds went by before I said, “Right. It’s still a toothbrush.”

Is this the sort of thing I should go around telling people? Probably not.

But since we’re on the subject:

We have a center island in the kitchen with drawers that hold utensils and baggies and things like that. On mornings when the kids have school, Tim’s at one end making breakfast and I’m at the other end packing lunches.

Well, we were always bumping into each other because the baggies I needed were on Tim’s side and sometimes he needed a cutting board or something that was on my side. And all that bumping around when we were in a hurry got kind of irritating.

This went on for longer than you would imagine until finally I got the idea to switch all the stuff in the drawers.

I was about to take everything out of the drawers for the switch when Tim went one better and moved the drawers themselves. That hadn’t even occurred to me!

You’re probably thinking I’m too ditzy for words, but aren’t these good examples of the kind of forest-for-the-trees thinking that can keep us locked into doing things a certain way just because that’s how we’ve always done it? Or, worse, we get stuck believing there’s only one right way to do things, even when it’s obviously not working?

Take dieting and exercise, for example. We want to know the one secret that will help us lose weight and keep it off, but the truth is that what works for Person A might not work for Person B. You might have someone who finds that running keeps her in shape, while another person gets too hungry from running and overeats. Daily weigh-ins might feel oppressive to some, but it’s what helps some of us keep things under control.

Or take parenting. There are plenty of experts telling us what we should or shouldn’t do. But every child is so very different and what makes sense for one might not work at all with another. You might have one who likes to be comforted if he gets hurt and another who wants to nurse her injuries herself. One kid might thrive with lots of praise and encouragement while another doesn’t need a lot of feedback from you.

So our challenge is to pay attention to why we do what we do and then not be afraid to change if what we’re doing doesn’t make sense!

The Monastery Cat story sums this all up beautifully:

During evening meditation, a cat that hung around the monastery would make so much noise it distracted the disciples. So the spiritual teacher ordered that the cat be tied up during the evening practice.

After the teacher died, the disciples dutifully continued to tie up the cat during meditation. When that cat died, another cat was brought to the monastery and tied up. This continued on for years.

Centuries later, the ritual of tying up the cat was still being observed, and learned scholars wrote about the religious significance of tying up a cat for meditation practice.

P.S. Someone just asked, off the record, why Tim and I didn’t just switch places? Great question! But we actually do have a good reason for that: the outlet for the toaster is at Tim’s end.