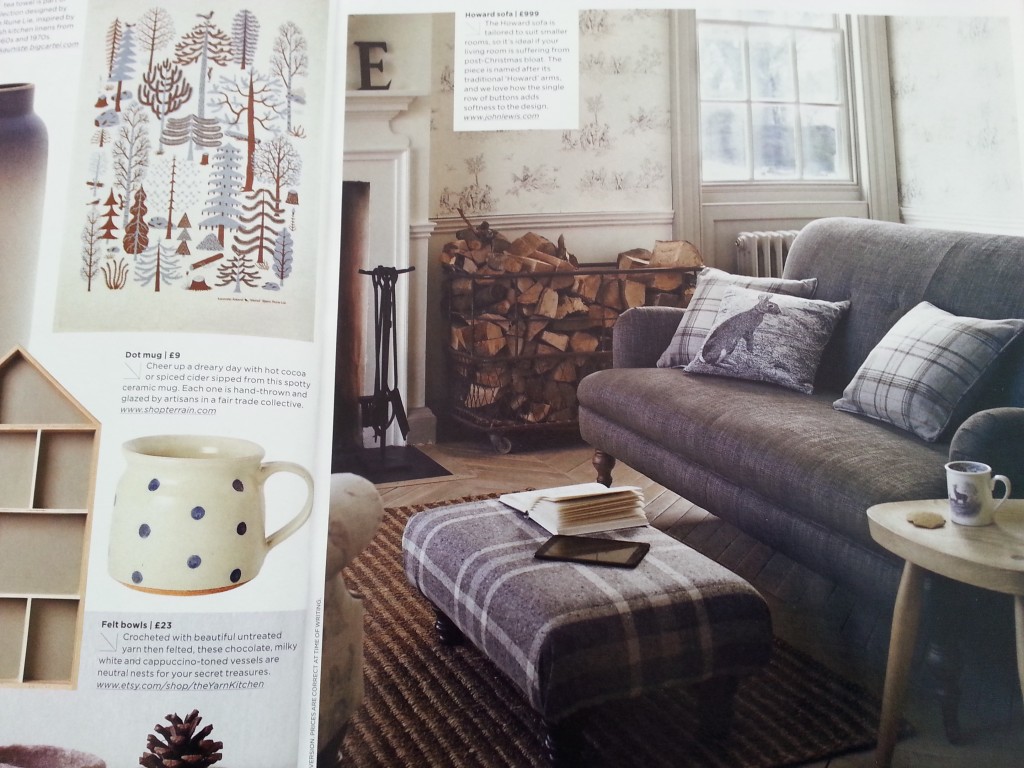 To be honest, I’m not even sure I’m allowed to talk about wallpaper. You see, the walls of our old house—our first home—were literally covered in wallpaper. Every. single. wall. Living room, kitchen, bathrooms, family room, hallways…even the laundry room had wallpaper. But it was a charming house and we weren’t planning to stay for long, so we ignored the wallpaper.

Until it was time to sell. Conveniently pregnant with Will, I took Andrew and Lexie off to a family reunion one weekend at the Wisconsin Dells and left Tim to tackle the wallpaper. To this day, his eye starts to twitch at the word. Seriously, the next time you see him say “wallpaper” and watch what happens.

So I feel kind of bad bringing it up. But look at that photo up there. Isn’t the room beautiful? Doesn’t it invite you to curl up and relax in front of the fire with a good book, a cup of tea, and your labrador? The wallpaper provides such a soft, subtle background.

(The room is featured in a British publication called The Simple Things. I could live in this magazine. Since I can’t actually do that, I’m working up the nerve to pitch them some ideas.)

Anyway, I’m thinking about wallpaper because something has to be done about this room: 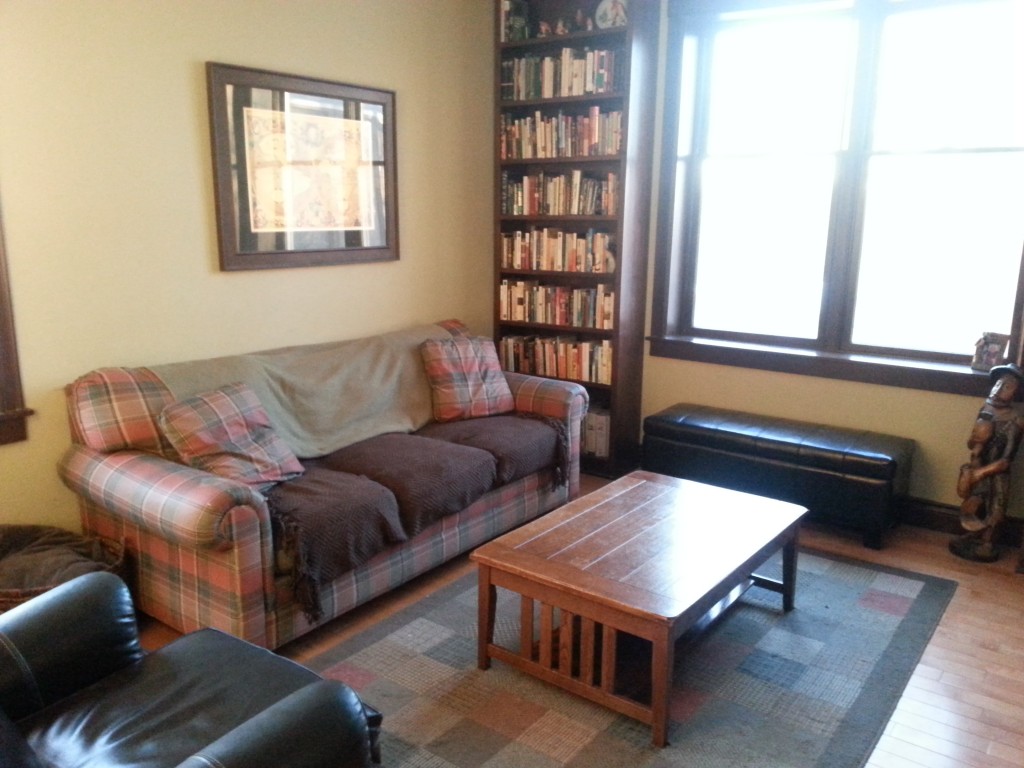 We call it the Away Room after the Not So Big House movement of the aughts. Really, it’s the TV room. And it needs help.

For starters, those blankets on the sofa are covering up ripped seams bursting with white stuffing. The rug is too small, the lighting is awful, and all six of us can’t even watch TV comfortably in here at the same time. You should have seen us on Oscar Night. Tim was perched on the bench, Andrew was in the leather chair trying to find a place to put his five-foot-long legs, and the rest of us were smooshed onto the sofa. Which made the blankets go haywire, which made the stuffing fly. (Poor Will. Until recently, when he passed me in height, he used to sit in that basket out of desperation.)

It probably goes without saying, but I’m not any kind of a designer. And Tim is even worse. At least I try to tell a story with my decorating. Tim on the other hand likes his furnishings cheap and available. [Insert joke here.]

For example, he picked up that map on the wall at Costco. The only reason I let him keep it was because it has a Tolkien-esque “beyond here there be dragons” feel to it. Last week he brought home a couple of pictures for the girls’ room that he picked up at Menards. I’m not dissing Menards art, but where’s the story? 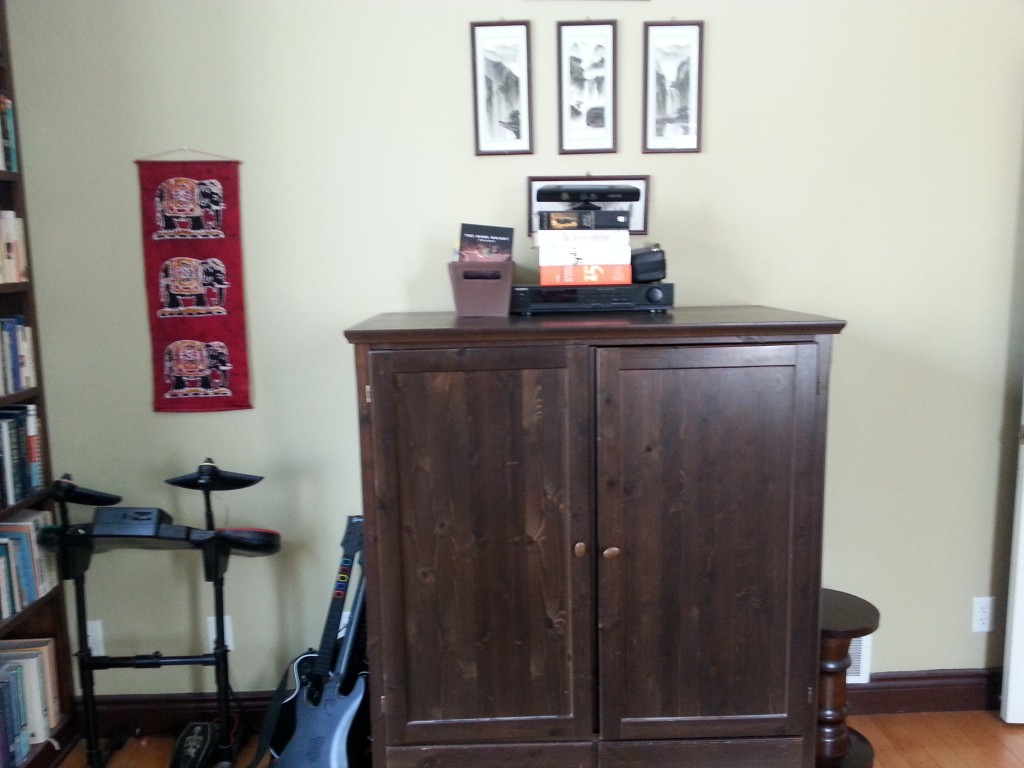 I suppose this room started out as “English library” but now it’s sort of morphed into a game room. Those books piled on top of the (hand-me-down) cabinet? They’re positioned to hold the Just Dance game-thingie at just the right angle. The Guitar Hero equipment is piled in the corner. Tim’s mother gave us the giant spool. I have no idea what that’s about.

The room has also become a catch-all for random treasures from afar. The elephant wall-hanging was a gift from friends returning from India. We carried the statue of Juan Francisco all the way home from a visit to friends in the Dominican Republic. And we bought the pictures above the cabinet from a young artist with a stall across the street from the White Swan Hotel in Guangzhou.

He painted these using only his fingers, nails, and the palm of his hand. Amazing. 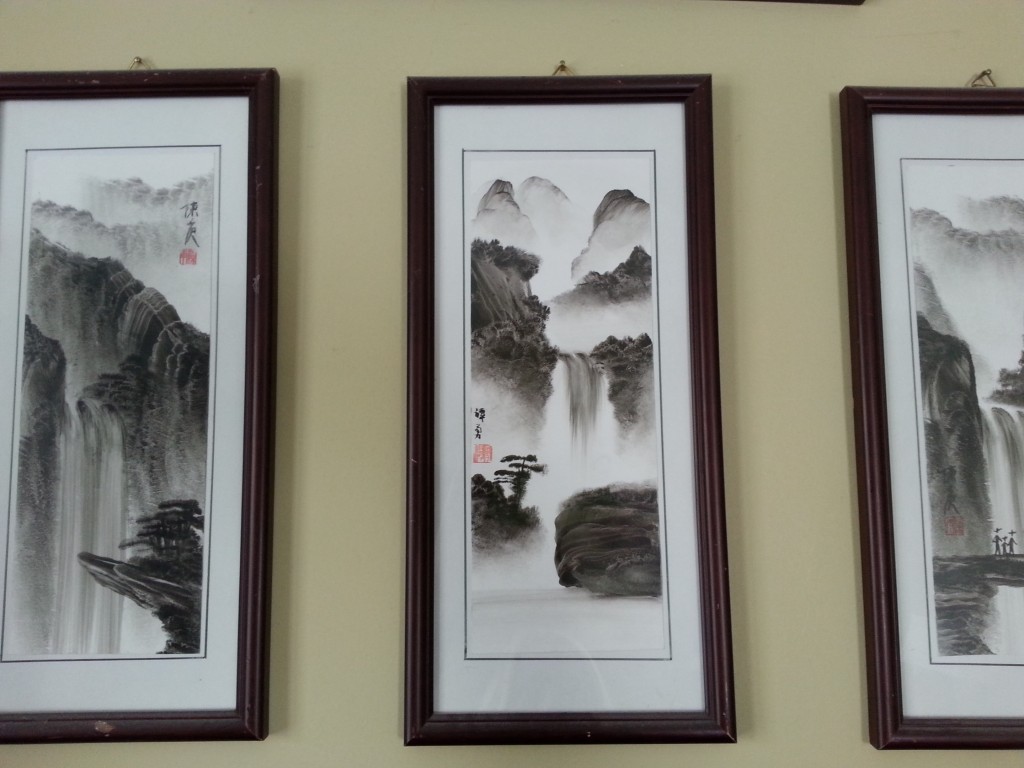 The idea of fixing this room is making my head spin, but when we get back from the band trip it’s next on the agenda. I will not be defeated.

So what are your thoughts on wallpaper? Are you for or against? Do you have any ideas for seating large numbers of people in a small space? What do you do with art that’s meaningful but doesn’t really go with anything?