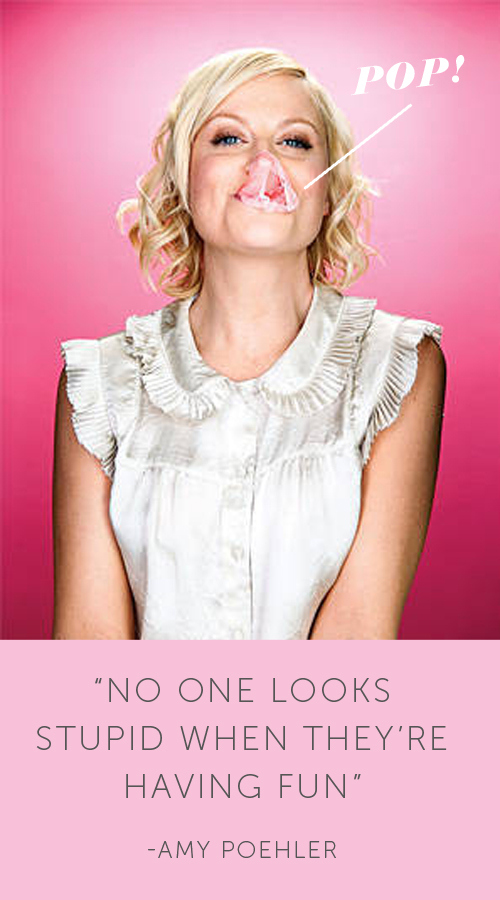 Before I became a mom, I had no idea that my kids would teach me just as much as I teach them. More, actually.

Like this morning. Andrew came downstairs wearing a striped hat à la The Cat in the Hat.

Luckily, Andrew just shook his head and said, “It’ll be fine, Mom. You worry too much about what people think.”

See, I don’t think of myself as someone who cares too much about what other people think. I’m pretty cool because, you know, I was a camp counselor at the U of M and had to act like a big goofball in front of the entire freshman class. I’ve crawled through mud wearing an iceberg on my head. I’ve even tap-danced in a few recitals in front of practically my entire town…sober.

But the truth is, I wasn’t doing it alone. I had buffers…co-counselors…compadres. We were in it together, sink or swim.

Kind of like at weddings. They’re one of the few places where you see people letting loose and dancing and having fun. Maybe it’s being surrounded by family who have to love you even if you get a little crazy doing the “Cupid Shuffle.” Or maybe it’s because no one’s going to leave the bride out there dancing alone. Or it could just be the alcohol.

Whatever it is, wouldn’t it be great to take that sense of fun with you into everyday life?

I think that’s why people like to have kids. They’re built-in excuses for acting silly. You can wear costumes and run around the playground and sing and dance and juggle and act as crazy as you want and it’s called “good parenting.”

But to go there alone? To be the only one wearing a striped hat or pumping your fist, yelling “Hey!” during “The Hey Song”? That takes guts.

I’m not sure why Andrew is so flippin’ confident. He’s smart and good at stuff and all that, but so are lots of people. I think the main reason why he’s willing to go there is because he’s committed to the story.

When you’re committed to the story, you don’t care what other people think. All that matters is the story. Going for the laugh. Singing the song. Running the race. Believing in something. If you fall flat on your face, great. Now you’ve got more material to work with. Maybe that’s why we love writers and performers and athletes. They go where we’re afraid to and show us how it’s done.

I’m glad Andrew laughs at me and my fears about what people will think. I thought I was pretty brave, but he and his siblings are pushing me to be braver every day. I want them to see all the things that are possible, unhampered by people looking at them sideways. Especially when it’s their own mother.

I texted Andrew to apologize for being so lame. He texted back a photo of himself being awesome in his hat, having a blast. As usual.

No one looks stupid when they’re having fun.

U2 Got Rejected and So Will You…So Make the Most of It
Dear Future Mom: World Down Syndrome Day—March 21