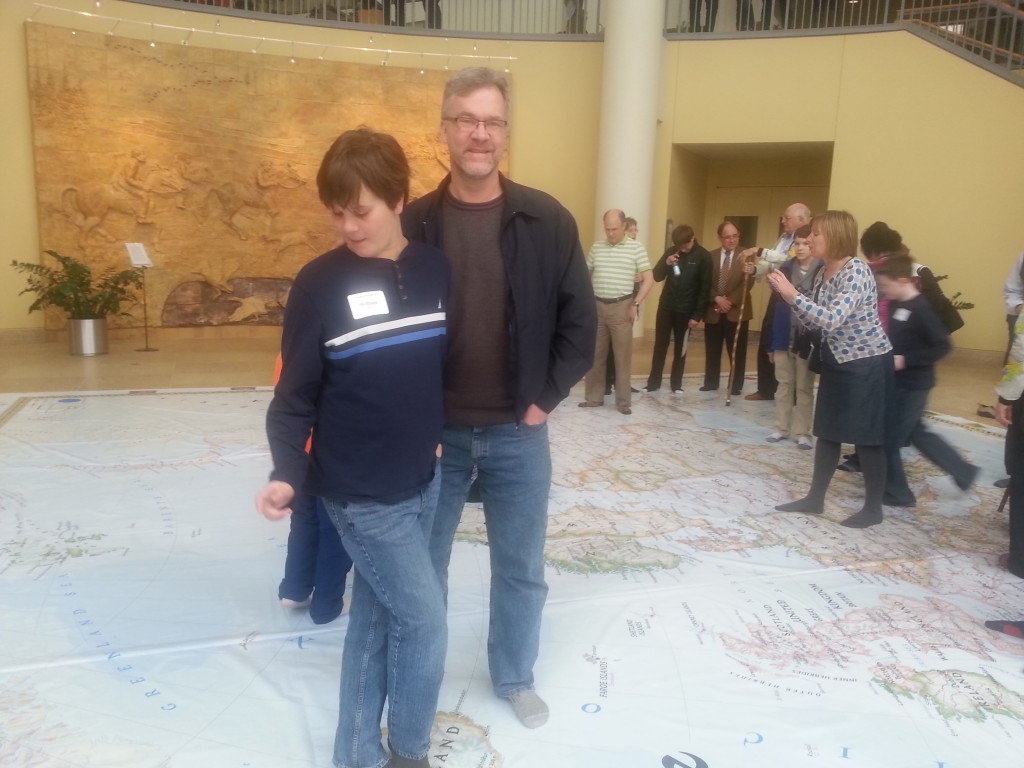 Tim and Will on the Giant Map of Europe at the National Geographic Bee in Madison.

Today is Tim’s 46th birthday. To celebrate those 46 wonderful years, I thought it would be fun to list 46 Awesome Things about Tim Taylor. So in no particular order because I’m typing as I go, here they are:

1. He never complains. I’m not exaggerating. The entire time he was in the hospital after his mountain biking accident, he didn’t whine or fuss once. Not once in more than three weeks. He just worked hard to get better.

2. He patiently listens to me complain.

3. He has a knack for finding great new music and introduced me to some of my favorite bands, like Over the Rhine and The Cowboy Junkies.

5. He makes me laugh every day. Even when I’m mad at him, he can still make me laugh.

6. He’s incredibly loyal and inspires loyalty in others. He’s worked with the same core group of people for more than a dozen years, and they’ve got each other’s backs. One of them is even Lily’s godfather.

7. He plants bulbs with the kids in the fall and a vegetable garden and pumpkin patch in the spring.

8. He spends countless hours making a skating rink every winter.

9. He doesn’t treat his girls like princesses. He has too much respect for them to do that. They’re growing up strong and confident because of his belief in them.

10. He’s always respectful of his parents.

12. He took tap lessons with me when there weren’t enough people signed up to hold the class.

13. He doesn’t care about material things. When we were first dating, I accidentally hit the door of his brand-new Ford Probe on the curb. I was mortified, but he shrugged it off and said it was no big deal. And he meant it.

14. He always puts his family first. Tonight, for example, he gets to celebrate his birthday between 6:30 and 6:45 p.m. because of his children’s crazy schedules. Oh, and he has to pick up his own birthday cake. But he doesn’t complain. (See #1)

15. He tells people that he wanted two kids and I wanted four, so we compromised and had four.

17. We watched The Impossible recently and he paused the movie to demonstrate the proper technique (learned in survival training) for carrying someone in a disaster situation. The whole time we were watching the movie I was thinking, as long as Tim was with me I wouldn’t worry.

18. He’s always willing to meet me halfway. If not right away, then eventually.

19. He introduced me to coffee ice cream.

20. He played Division 1 college lacrosse and joined a league a few years ago full of mostly college-age kids who called him “sir.” He joked that his helmet was older than most of them.

21. He performed in a play last fall—for the first time since high school—and did an amazing job.

22. He’s the biggest cheapskate I know. Which doesn’t sound awesome, but it means he can fix anything because he doesn’t want to pay for a new whatever-it-is.

23. He never criticizes me. He says I’m hard enough on myself.

26. There are a couple of movies, including Out of Africa, that make him cry.

27. He’s never been That Dad on the sidelines. You know the one I mean. Probably has something to do with #20. Been there, done that.

28. He’s a master griller. Put a cold beer in one hand and a metal spatula in the other and he’s a happy camper.

30. His dad was stationed in England when he was growing up, so he can do a super-hot English accent.

31. He never needs to be entertained.

33. He loves desserts. Every year he asks for a coffee ice cream cake for his birthday. If he goes to the store, he almost always gets me a bar of dark chocolate.

34. He doesn’t like to be laughed at. But he’s getting better.

35. He has huge faith in God and always believes that things will work out. I’m pretty sure God has a lot of faith in him, too.

36. He is remarkably unflappable, so it’s extra fun when he gets “flapped.” We’ll never forget the sound he made when he scooped a chicken head onto his plate at a restaurant in China.

37. He is generous to a fault. He will quite literally give you the shirt off his back.

39. He doesn’t coddle me, which can be irritating, but I know it’s making me a stronger person.

40. He has embraced my family as his own, and they love him.

42. He is kind to animals and has allowed (and cleaned up after) three dogs, two cats, a lizard, a guinea pig, several hamsters, and countless fish. And he feeds the wild birds every day.

43. He loves hiking, fishing, the Dallas Cowboys (or at least he used to—we still have the darn chip & dip helmet), the University of Maryland Terrapins, pizza, and listening to live music.

44. He spent years in the Big Brothers/Big Sisters program, mentoring a young boy from the time he was 9 until he graduated from high school. Tim stayed in touch with him through good times and bad. The young man passed away tragically this winter and Tim gave an incredibly moving tribute at the funeral.

45. I admire how he and Mary Poppins never explain anything.

46. He taught me that “there is no limit to the good you can do if you don’t care who gets the credit.” (General George C. Marshall)

For all of this and for being my best friend for 22 years, thank you and happy birthday, Tim Taylor!