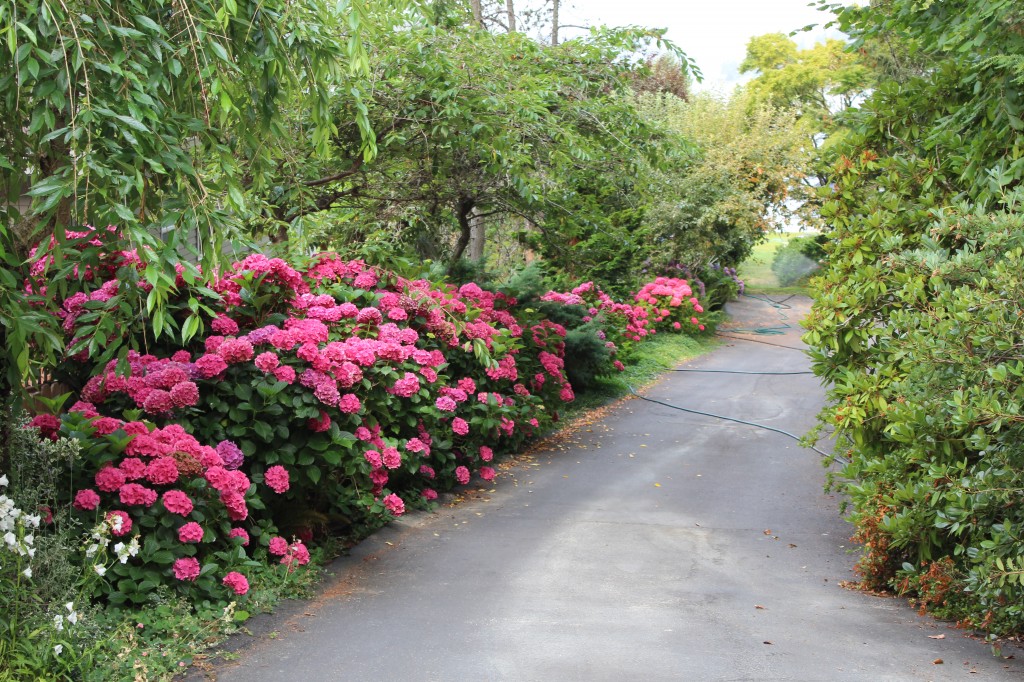 Tim and I are terrible about going on dates. Some of it has to do with busy schedules, of course, but mostly it’s my fault for not wanting to leave the house if I don’t have to. It’s funny because when I was young, I always wanted to Go Out, but now I just want to Stay In. Preferably in my pajamas with a good movie on Netflix.

But we found ourselves with a couple hours early on Saturday morning with nothing on the calendar, so we decided to bike down to Lynwood Center, via Pleasant Beach, and call it a date. We set off through Fort Ward Park, but instead of turning left to go to South Beach, we turned right and biked the trail along the water. Normally, we’d have a gorgeous view of the Olympic Mountains to the west, but the haze from the wildfires in Canada is still lingering.

After a mile or so, the park ends and the trail becomes Pleasant Beach Drive. Houses start up here, on both sides of the road. Isn’t that the most inviting driveway? I do love hydrangeas. 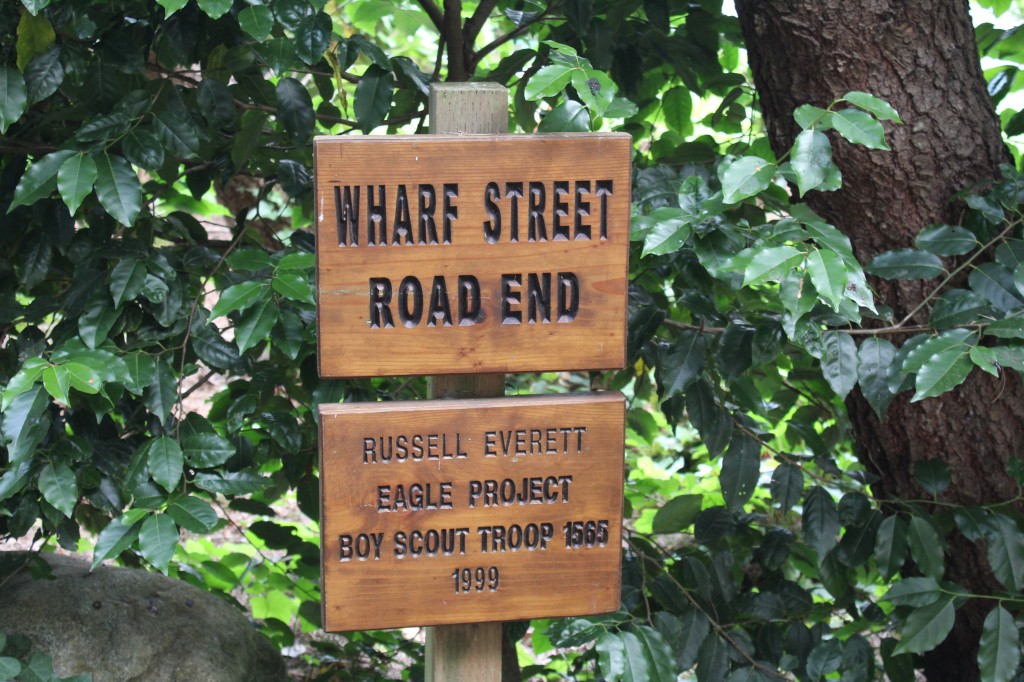 Bainbridge has more than 60 Road Ends, which is nice because of course all the shoreline property has been gobbled up. You can walk or bike down to the water and there’s usually a bench or some rocks to sit on to enjoy the view. 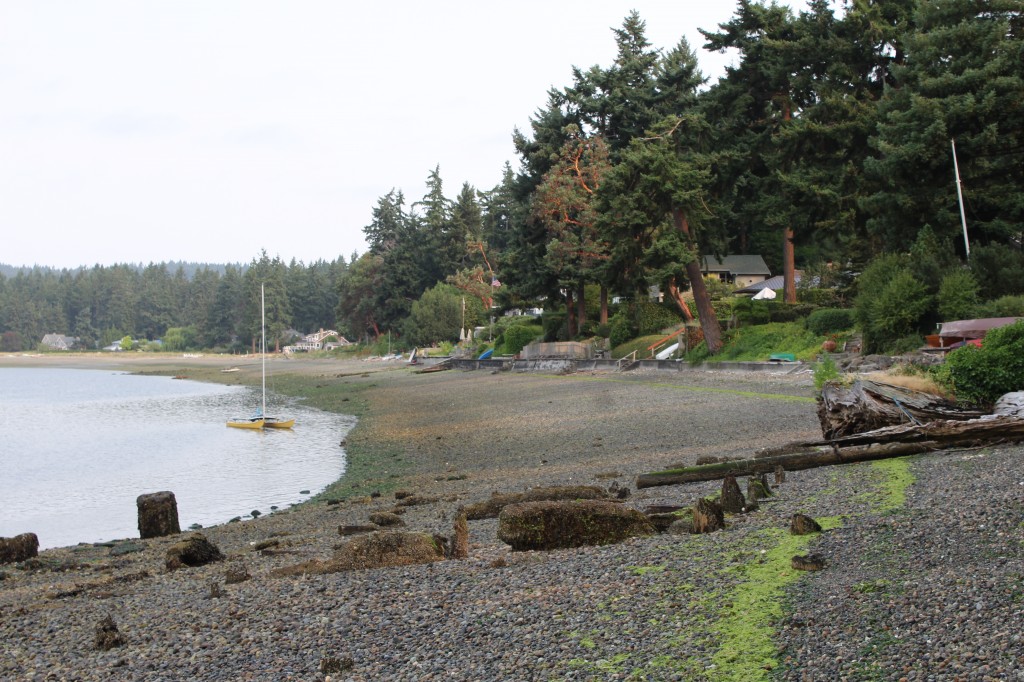 We watched the seagulls on Rich Passage smashing shells against the rocks. 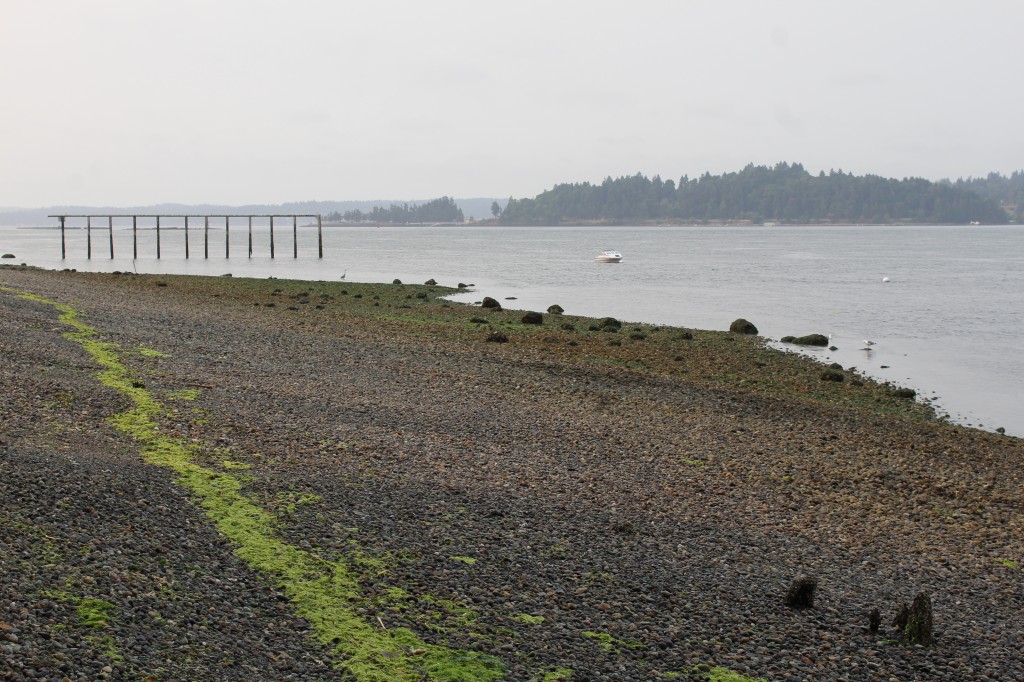 We’re in the Puget Sound, but on the western side of the island, it has more of a feel of being on a river back home. The eastern, Seattle-facing side feels more ocean-y. 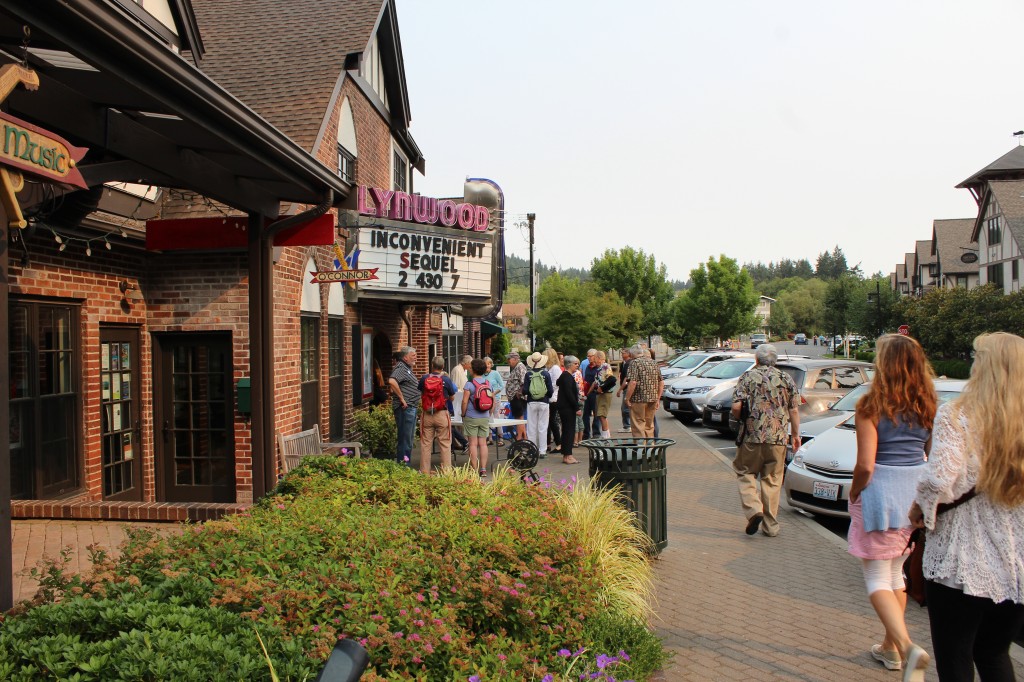 We smiled at this typical Bainbridge sight: People lining up bright and early to watch Al Gore’s film on climate change. 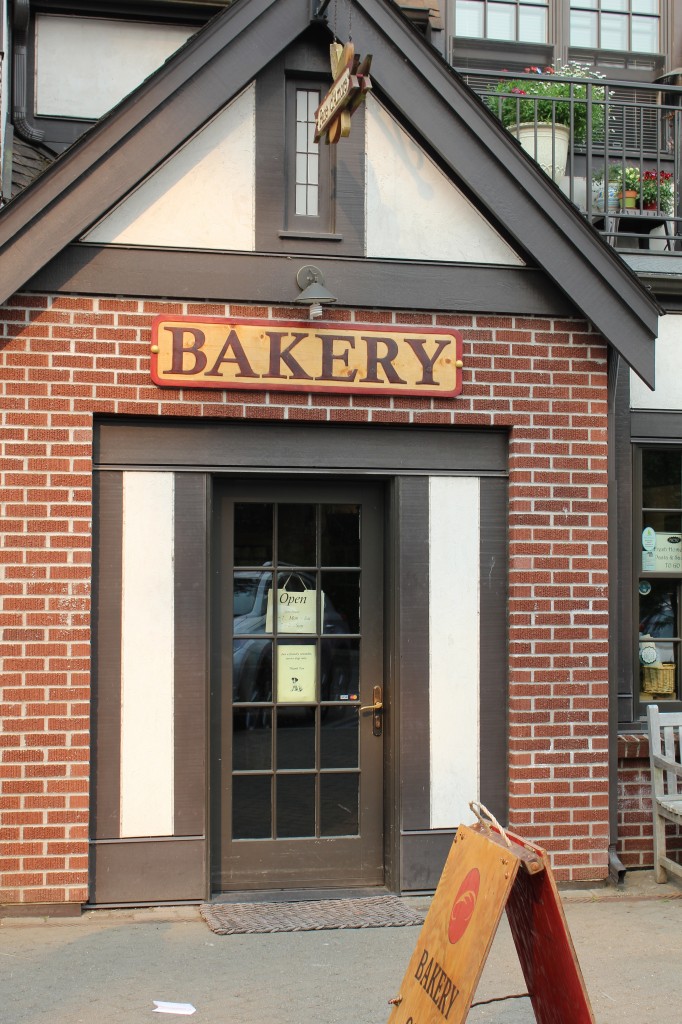 We stopped in Pane d’Amore for treats. We’ve decided that their chocolate croissants are the best on the island. 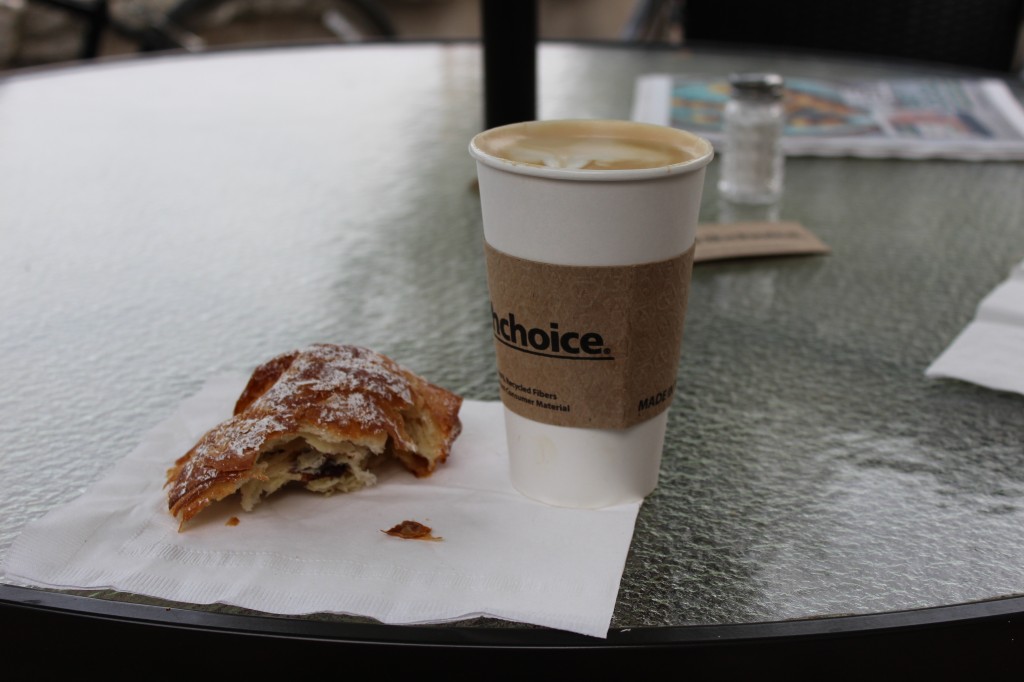 And then across the street to the Marketplace for coffee. I had my usual vanilla latte. Delicious. Tim got a cappuccino, which he said was the best one he’s ever had. We sat and watched the people and dogs—so many dogs!—go by. 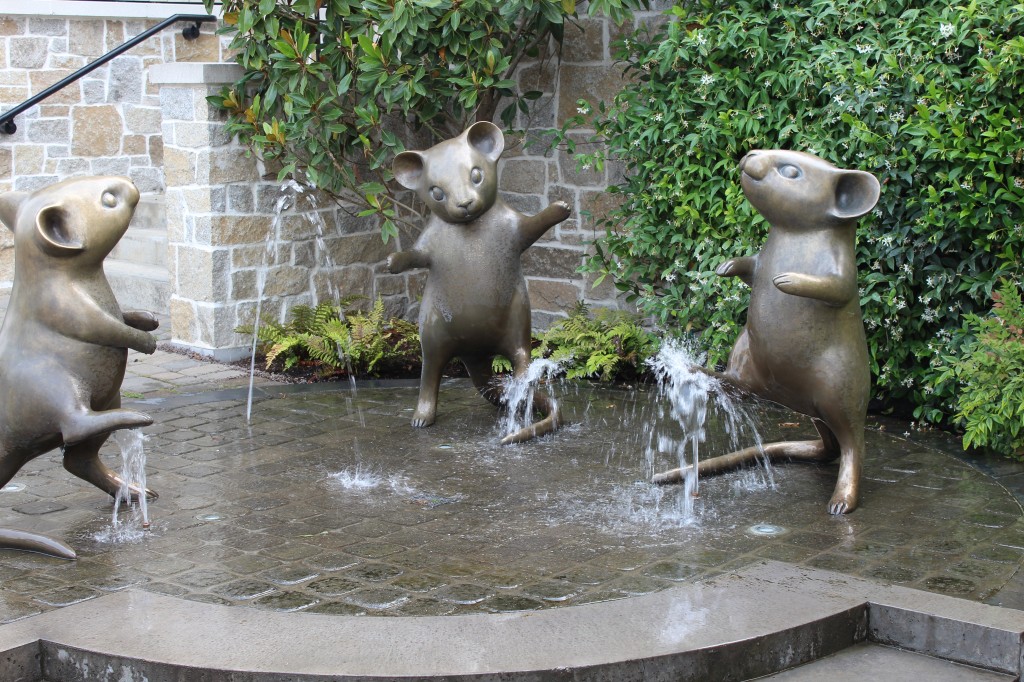 There are usually small children playing in the fountain, but the day hadn’t heated up enough yet for even the staunchest of toddlers to brave the cold water.

Our to-do lists started tugging at us, so we finished up and biked home, where teenagers were waking up and dogs were resentful because they’d been left at home.