We’re in an in-between stage where a lot of the wall art from our old house doesn’t work in the house we’re renting, but until we figure out what we want to do next, we don’t want to spend much money on what might just be temporary art. But blank white walls don’t feel very homey.

So I was really happy to see this art wall project on “The Real Housewives of Beverly Hills.”

I sort of feel like I should explain why I was watching “The Real Housewives of Beverly Hills.” It all started when I read Yolanda Hadid’s book, Believe Me, about her battle with Lyme disease. Lyme disease is a big deal back in Wisconsin. I had it once, but because we lived in a place where it’s so common we caught it right away and I haven’t had any issues. Tim’s had it a couple of times, but we’re not sure if some of the neurological stuff he deals with is from Lyme disease or his spinal cord injury. But I was curious to read about her experiences.

Anyway, after reading the book I had to check out the show. And next thing I knew, I’d watched all four of the seasons that Yolanda was in. It’s addictive! During the course of the show, Yolanda battled Lyme disease and, while she was stuck at home, she came up with this idea of having friends and family paint squares to add some fun and color to her house. I thought this would be a perfect way to commemorate visits from the people we love—art and memories all in one. 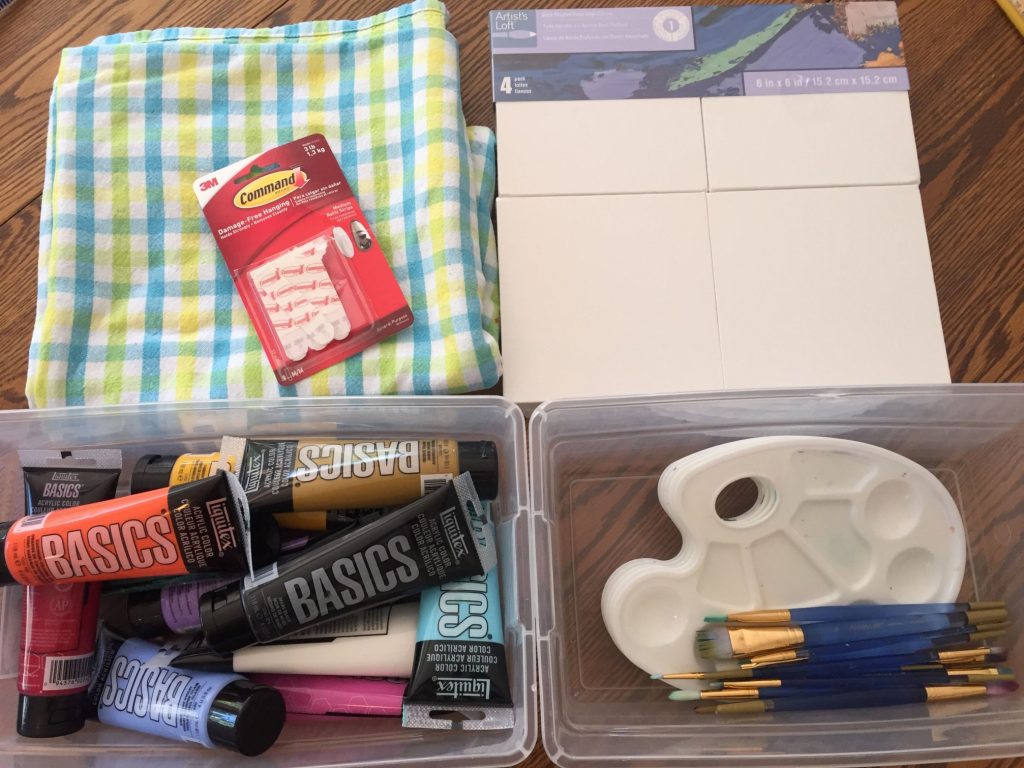 And that’s it! So now you just throw the paints and canvases out there and see what people come up with. 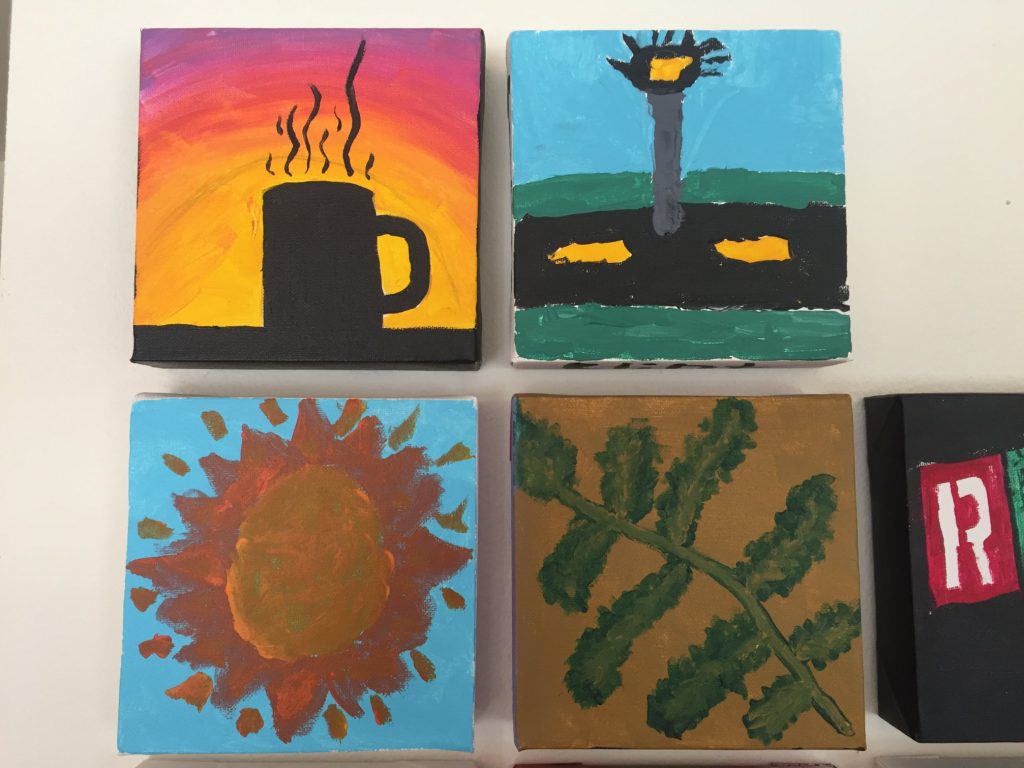 I love Shelby’s coffee mug from a favorite cafe her family discovered during their time in Seattle. Her brother, Clint, chose to memorialize pigeon spikes. (I hadn’t noticed pigeon spikes before, but I’m sure I will now.) Will painted the sun and Lily riffed on a plant. 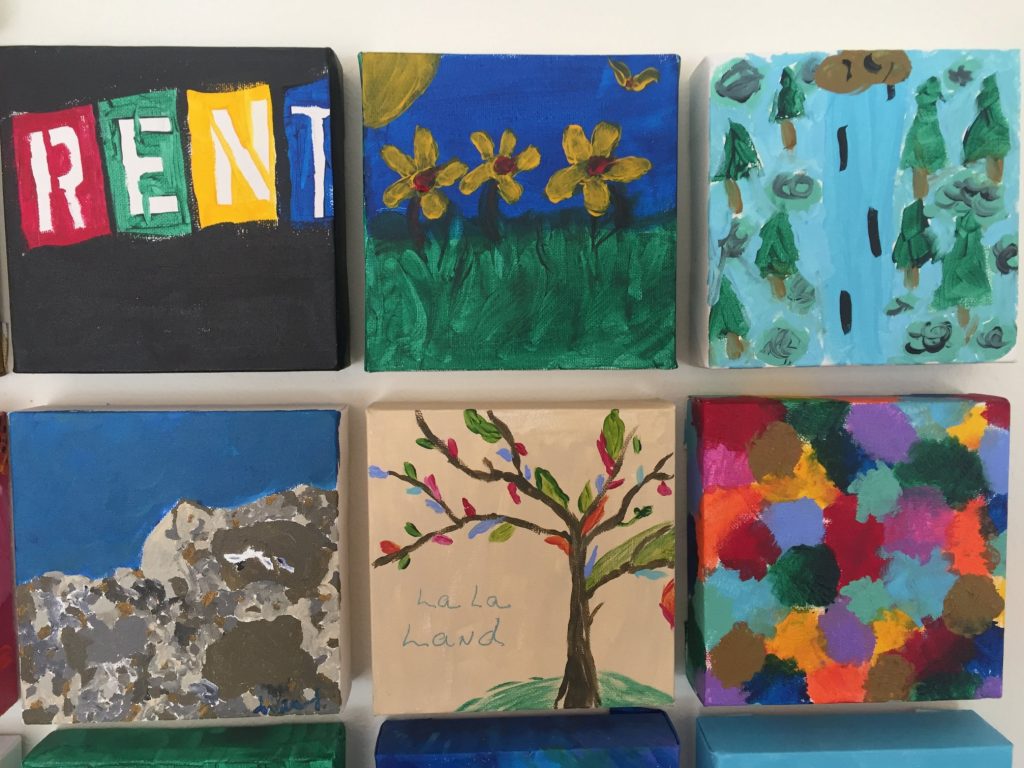 I love that Lexie chose to commemorate her performance in “Rent.” Great-Grandma Marilyn’s flowers will always remind us of how much she loved seeing the abundance of flowers during her visit to Bainbridge. Kennedy drew a scene straight out of her family’s visit to the Olympic Mountains. Annika’s painting is a bird’s-eye-view re-enactment of a scene at Rockaway Beach where she broke open an old crab leg and a seagull hopped over to eat it. My mom has a point with her tongue-in-cheek nickname for Bainbridge Island. Lily (who you’ll notice jumps in to paint with every group of visitors!) added some great color to the art wall. 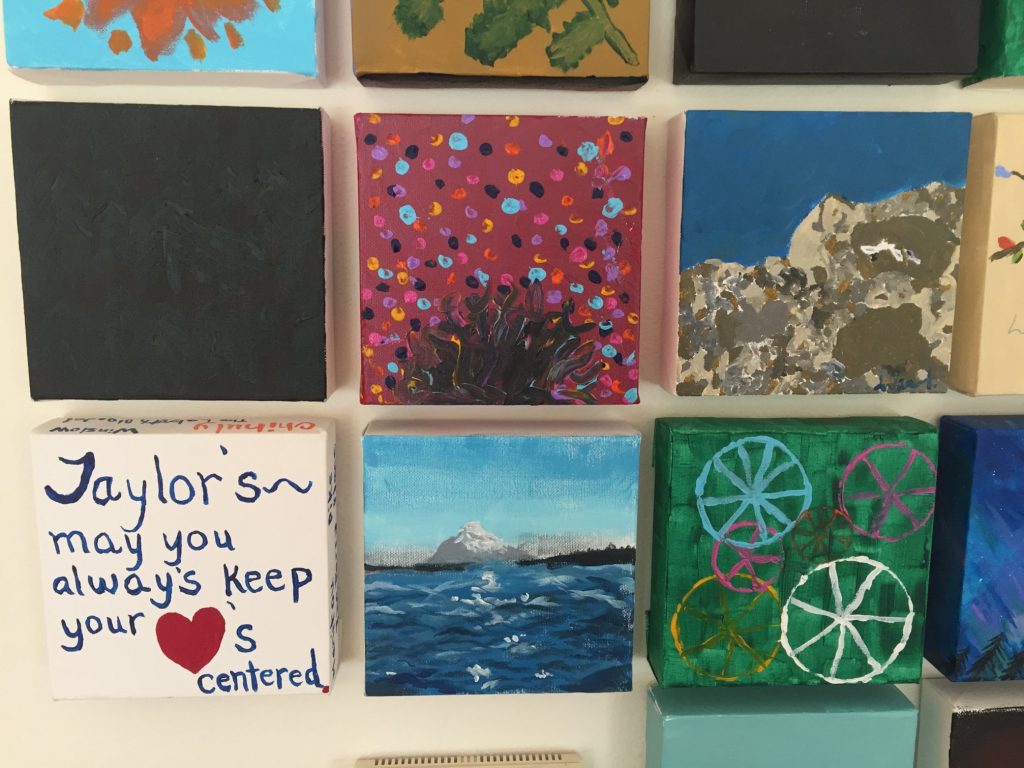 If you look very closely, you’ll see some very faint trees in David’s painting, which we call “Bloedel at Night.” Lily’s painting has a Chihuly-esque quality, if you ask me. Christina’s message inspires, just like she does (she also wrote her favorite parts of the visit around the edge of the canvas). Lexie beautifully captured the feel of Mount Rainier and Puget Sound and Tim created an ode to biking. Very appropriate. 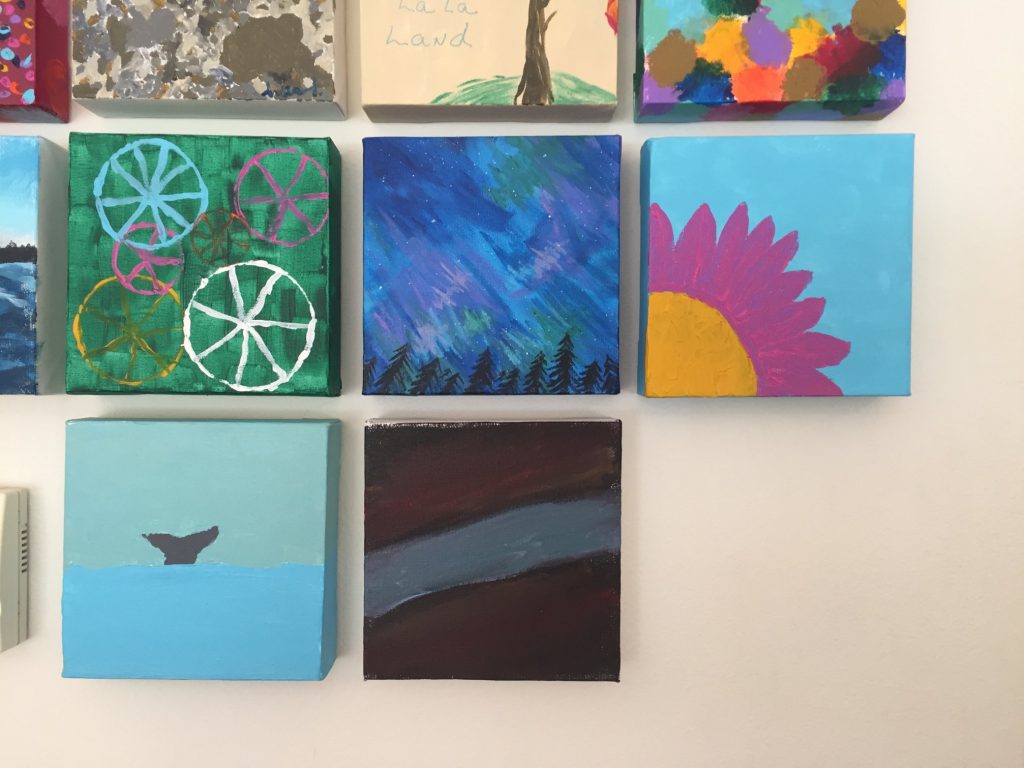 Chloe’s night-time sky is enchanting, I did a flower, and Taylor beautifully captured a special moment from a whale-watching cruise. And finally, Andrew’s painting has a very post-modern river vibe.

So there you have it. An easy way to create beautiful art for your home that makes you smile every time you see it.